Stills from the two movies.

Mumbai: Shah Rukh Khan's worries over 'Raees' are far from over.

The actor had tried to make peace with Raj Thackeray, by ensuring the Maharashtra Navnirman Sena President that Pakistani actress Mahira Khan, the lead actress of 'Raees,' won't be promoting the film in the country.

However, four days prior to its grand release alongside Hrithik Roshan's 'Kaabil,' Bhartiya Janta Party National General Secretary Kailash Vijayvargiya has hit out at the superstar, denigrating his film as that of an anti-national, while hailing Hrithik's 'Kaabil' as a 'Deshbhakt's film.

The highly jingoistic tweet religiously discriminates between the two stars and reeks of bigotry, although it tries hard to not be blatant. 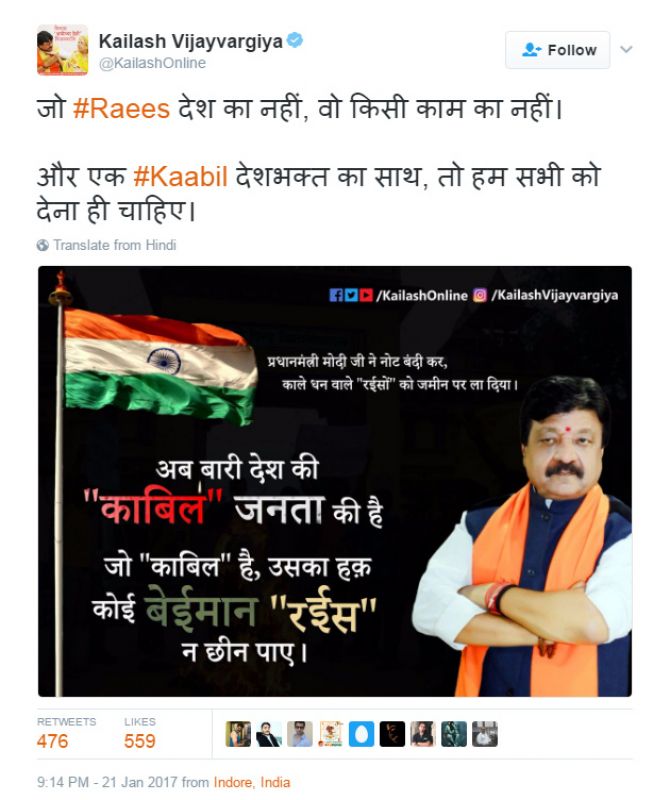 This isn't the first time he has targeted Shah Rukh Khan, though.

He had responded quite sharply when SRK had courted controversy by saying, "Not being secular and 'religious intolerance' is the worst crime a patriot can do," on his 50th birthday during a media interaction.

It remains to be seen how Shah Rukh might choose to react to the unsavoury jibe.