Mumbai: Ajay Devgn, who openly said that he wouldn't work with Pakistani artiste till the tension between India and it's neighbor Pakistan settles down, has now announced that a part of his upcoming film 'Shivaay's opening collection will be contributed to the Uri attack martyr's fund.

Cinema Owners and Exhibitors’ Association have started a fund raising initiative to help the families of the URI martyrs. The association held a meeting today as they requested people from the industry to be a part of the good cause. In the meeting, they approached Ajay Devgn, who happily agreed to contribute a part of 'Shivaay's opening collection.

We also approached Ajay Devgn as the producer of Shivaay to contribute his share and he has agreed for the same," Cinema Owners and Exhibitors’ Association said in a statement after the meeting was over. 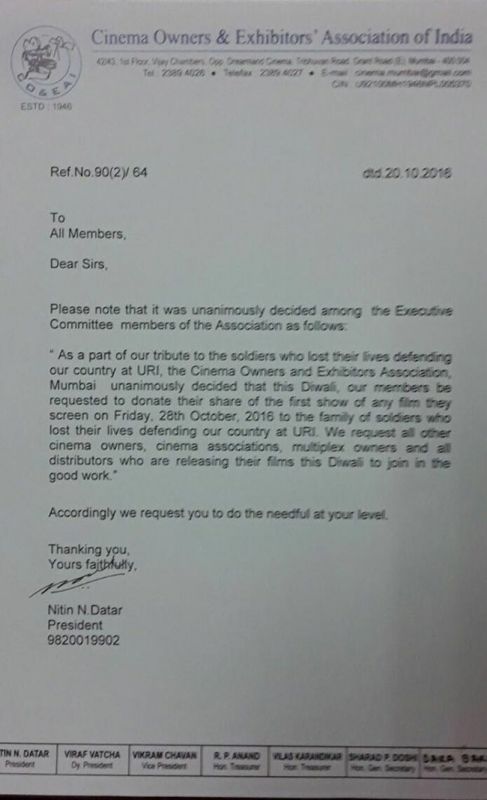 Here's their official letter by Cinema Owners and Exhibitors' Association.

"I whole heartedly support the fund raising for the family of the martyrs who lost their lives at URI defending our country. As the producer of Shivaay, I am pleased to announce that we shall match the contribution made by the members of Cinema Owners and Exhibitors’ Association," Ajay Devgn said.

Earlier, when Ajay Devgn, whose film 'Shivaay' is pitted against Karan Johar's 'Ae Dil Hai Mushkil' on the silver screen, was asked whether he will share screen space with Pakistani actors, he had said, "Not at the moment. I am very clear on this because you are an Indian first. I don't care if my film doesn't release in Pakistan. Their artistes are standing by their nation. They are earning here but are sticking by their nation. We should learn from them."

The actor also said that he isn't worried about his film's release in Pakistan.

His wife Kajol stood by the actor and applauded him for taking a non political stand.