New Delhi: Some hours after Kapil Sharma apologised to his co-star Sunil Grover over the infamous mid-air scuffle, the latter came up with a befitting response and that too, "with love."

Sunil took to Twitter to send out a note, pouring his heart out over the whole brouhaha and captioned it, "From a friend, with love."

He started saying, "Bhai ji! Yes, You hurt me deeply. Working with you has been a learning experience. Just one advice, start respecting human beings also apart from animals. All are not as successful as you are. All are not as talented as you are. But if they all are talented like you, who will value you."

"So, have some gratitude towards their existence. And also, if someone is correcting you, don't abuse the person. Refrain from using foul language in front of women who have nothing to do with the stardom you carry, they are by chance just traveling with you. Thanks for making me realise it was your show and you have power to throw out anybody, anytime. You are the wittiest, and the best in your field," he continued.

The actor, famous for his character Gutthi, concluded by saying, "But don't act like a 'God.' Take good care of yourself. Wish you lot more success and fame." 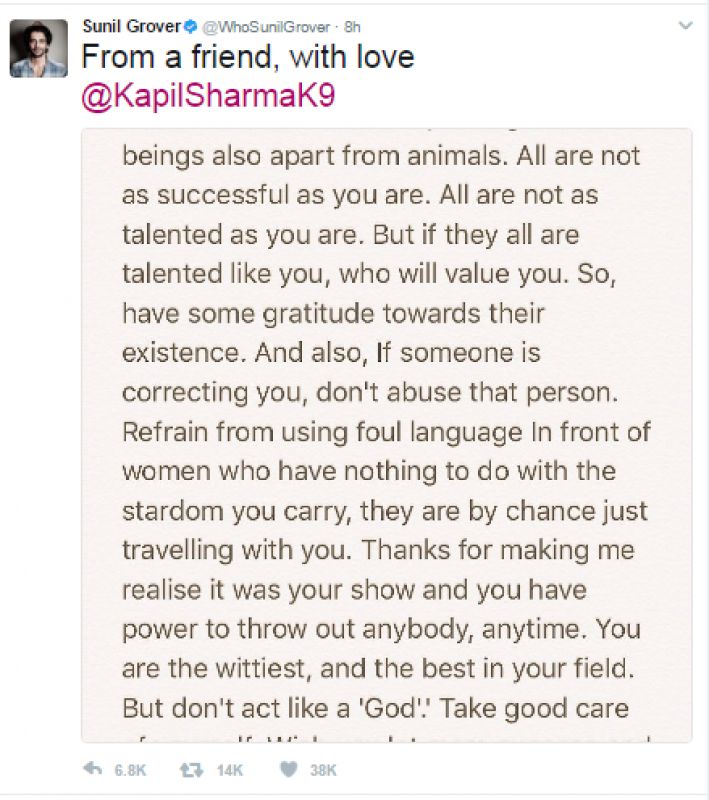 Last night Kapil took to Twitter to seek apology on the same and wrote, ""Paji @WhoSunilGrover sry if I hurt u unintentionally.u knw vry well how much I luv u. M also upset .love n regards always:)."

Earlier, acknowledging the issue in a Facebook post, the 'Kis Kis Ko Pyaar Karoon' actor wrote, "Hi.. good morning friends .. was celebrating my best time n suddenly I heard a news about me n sunil paji fighting.. first of all see where it is coming from.. what r the intentions behind this.. if I fought with him in the flight then who saw it n informed u.. is he trustworthy..? Some people enjoy these kind of stuff.. we eat together .. we travel together.. I meet my brother once in a year.. n spending almost everyday with my team.. specially sunil .. I love him.. I respect him.. yes I had a argue with him.but r we not normal people..?I shouted at him first time in 5 years .. itna to chalta hai bhai."

"We will sit n talk that where is the problem.. I love him as a artist as a human being.. he is like my elder brother.. why so much negativity all the time.. I respect our media.. there r some other serious issues which we need to focus. Is me n sunil's issue is so important n realted with the security of my country ..? We spend a lot of time together rather then our families .. n sometime it happens in family.. its our family matter.. we will sort this out.. zyada maze mat liya karoo. OK now m tired typing .. n one more thing.. I m going for the final schedule of Firangi. Hahahahaha.. sorry again promotion.. thank u so much for ur love n blessings... keep smiling n stay happy always :)) love u all (sic)," added ' The Kapil Sharma Show' host.

Kapil and Sunil, reportedly, had a fight as they were flying down with their team to Mumbai from Australia, after a show. Apparently, the former got drunk and belittled Sunil and also physically assaulted him.

Now, with his response, Sunil has fueled the rumours about his decision of quitting 'The Kapil Sharma Show,' following the spat.