I wanted to focus on my life: Abhishek Bachchan

DECCAN CHRONICLE. | RESHMI CHAKRAVORTY
Published Sep 20, 2018, 12:00 am IST
Updated Sep 20, 2018, 2:35 am IST
Abhishek spoke at length about his return to films, working with wife Aishwarya and his association with the city, in a candid interview.

The suave and dapper Abhishek Bachchan recently launched the Seamaster Diver 300M, one of OMEGA’s most iconic timepieces in Hyderabad, making it the first city in India to receive the collection.

Be it his commercial endorsements or movie projects, the one thing Abhishek almost always brings to every role he plays, is a hint of gravity. Basking in the glory of his recent movie outing, Manmarziyaan, Abhishek says he is super happy with his role. “It was a riot working with them, such a talented bunch of people,” he adds.

Abhishek came back to the screen after a hiatus of two years, which he states was a conscious decision. “I wanted to focus on my life and re-evaluate what all I have in hand. With Manmarziyaan receiving great reviews, I am focussing on my other projects now. At present, I have my dates locked till mid next year,” he shares.

Coming up next is a film with wife Aishwarya. The Bachchan couple will be seen together on screen after eight long years for Anurag Kashyap’s Gulab Jamun. The two have collaborated numerous times in the past and share a great chemistry onscreen.

“Gulab Jamun will hit the floors sometime next year and it is absolutely a pleasure working with her. The chemistry is there and we are both professionals who don’t bring our personal lives on set. But yes, it feels good to be with someone with whom we can go home post-shoot,” says Abhishek.

Interestingly, while his father and wife are active on social media, Jr Bachchan only has a subtle social media presence. “I feel social media was invented to interact with people and that is what I do whenever I want to. There shouldn’t be any obligation to be socially active always,” he says. 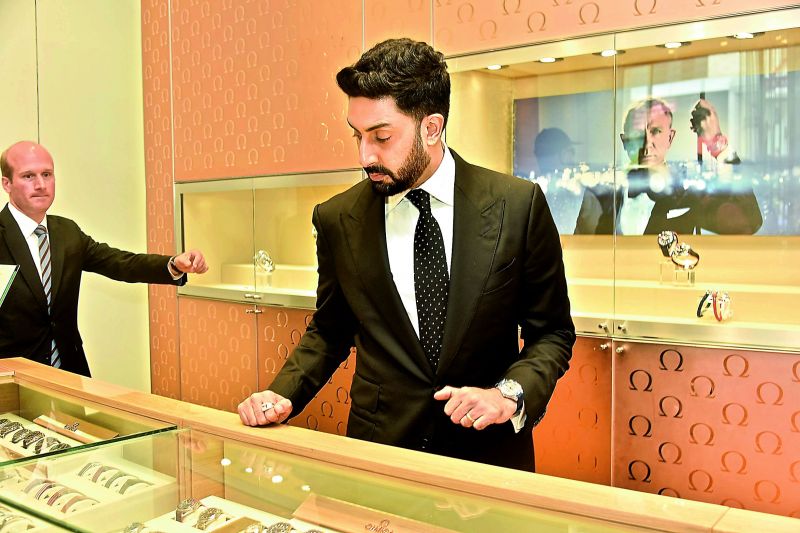 2018 incidentally marks the 25th anniversary of Seamaster Diver 300M, which is quite legendary in the world of ocean diving and has a special place on the wrist of James Bond.

Elaborating on his 11-year-old association with the brand, Abhishek says, “I’ve been with the brand since 2006, and am really proud to see it grow, specifically in India. The company has a great footprint all over the world, but its expansion in the country is something to look out for amongst all luxury watch brands. The Seamaster series is the preferred series from the Omega family.”

Talking about his association with Hyderabad, Abhishek says, “I have come to the city quite a lot of times for different purposes — shoots and now sports too. It’s always lovely to be here.” As for his team in the Pro Kabaddi League, he adds, “I am all gung ho about the League and hope we win this time.”