From Vidya Balan to Varun Dhawan, B'wood excited about Rajkummar Rao's Made In China

Made In China poster.

Mumbai: Given the thunderous response that the trailer was received with by the media and audiences alike after its launch today, B-town biggie's have also rallied behind for Rajkummar Rao's forthcoming venture Made In China.

After the super success of Stree - Rajkummar along with Producer Dinesh Vijan in association with Jio seems to have come back with an even bigger bang. Bollywood youngistan right from Varun Dhawan, Shraddha Kapoor, Kriti Sanon, Varun Sharma, Vidya Balan, Kriti Kharbanda  have extended support on their social media for Made in China appreciating the interesting topic and glimpses of Raj's performance. 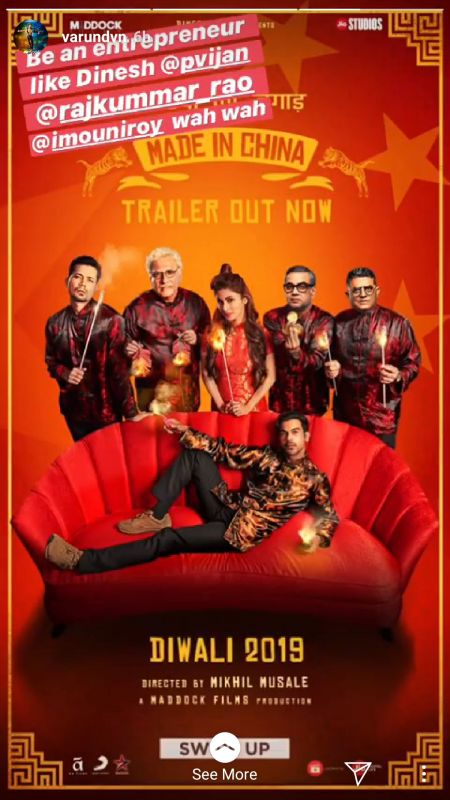 Not just that, Ranveer Singh and Arjun Kapoor also posted on Raj's social media appreciating  his unique look in the film.

Overwhelmed with the response from the audience and support from B town, producer Dinesh Vijan said "We at Maddock believe in creating content driven entertaining cinema that also has tremendous box office potential. Earlier such films were only considered as content cinema but over time, they have also proven to be box office successes. This has become possible today only because our audience has evolved and this young brigade of our industry has now been a part of this content driven cinema. It's support like this that gives us greater impetus to come up with more interesting cinema like this"

Made In China is a story of small time businessman and his jugaadu journey of becoming a successful entrepreneur. Directed by Mikhil Musale, the film also starts Moni Roy, Boman Irani, Sumeet Vyas, Paresh Rawal and Gajaraj Rao.