New poster of Lipstick Under My Burkha can spark off a rebellion!

Second poster of the film.

Mumbai: There are movies that are made with the intent to entertain, to make you laugh, cry, whistle and more. And then there are movies like ‘Lipstick Under my Burkha’ that pepper all of these with a dash of rebellion. Taking on the 'crazies' who think they're the guardians of women. 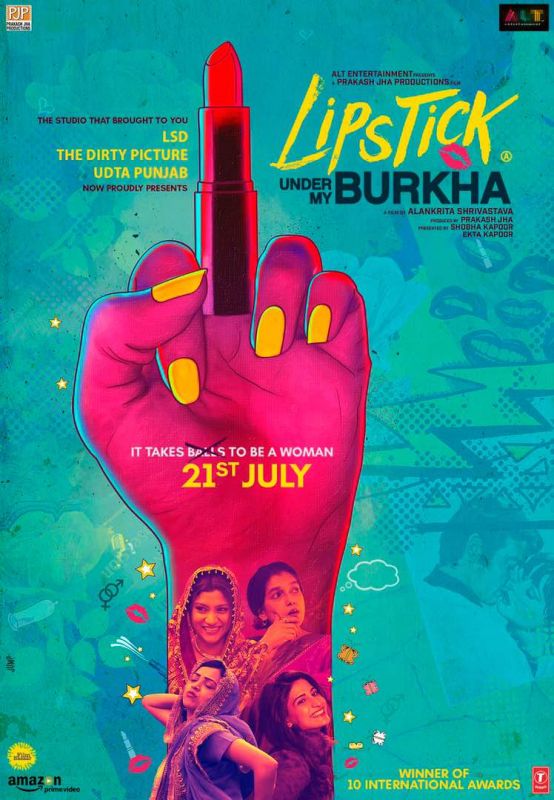 Set in the crowded lanes of small town India, 'Lipstick Under My Burkha' chronicles the secret lives of four feisty women chasing a little piece of freedom. Though stifled and trapped in their worlds, these four women claim their desires through small acts of courage and stealthy rebellion.

Movies like ‘Lipstick Under My Burkha’ are rare phenomenon, so rare that they deserve more than the accolades bestowed upon them, they deserve to be shown to the world with no discrimination against any community, gender, age or social standing.

To all the women who're constantly being told what to do, where to go, how to be - here's an answer. It takes balls to be a woman. NOT!

And to all the men who are man enough to let women be, ‘Lipstick…’ celebrates that very spirit. After a 6 month battle with the censor board, after sweeping 10 awards internationally, 'Lipstick Under My Burkha' finally hits theatres on 21st July!

The film 'they' didn't want you to watch. 'They' called it - 'audio pornography', 'sexually contagious' and deemed it 'too lady oriented'.

While the chuckles from this haven't died down, neither will our voices.

Produced by Prakash Jha, directed by Alankrita Shrivastava, ‘Lipstick Under My Burkha’ will release on July 21, 2017