Screengrabs from the pictures and videos on Instagram of Hiroo Johar's 75th birthday bash.

Mumbai: Karan Johar’s protégé and an actress who people often refer to as his daughter, Alia Bhatt, recently turned 25 on 15 March.

Earlier there were reports that he was to go to Bulgaria, where his production 'Brahmastra' is being shot, to be with Alia for her special day, he later decided to stay back in Mumbai to make arrangements for his mother’s special day.

And the filmmaker did put up a grand event for his mother, with several Bollywood stars in attendance.

The day started as seen in this video of Hiroo Johar shot by Karan as she cuts the cake in the company of Rani Mukerji, Shweta Bachchan Nanda and others.

KJo then shared some adorable pictures of his mother, also one involving her grandchildren Yash and Roohi.

Thank you @shaadisquad for doing this beautiful invite for my mom!!!!❤️❤️❤️ 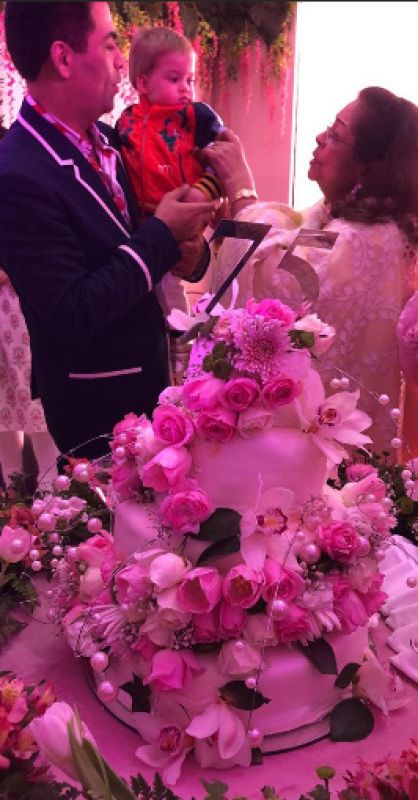 Hiroo Johar cut a lavish three-tier cake on the occasion and many celebrities like Maheep Kapoor and Seema Khan put up videos and pictures on their Instagram story.

But one of the highlights of the evening was a special performance from Sonu Nigam, crooning to songs like 'Lag Ja Gale' and ‘Kal Ho Na Ho’ which reportedly made the mother-son duo teary-eyed. The singer even got Johar Sr to sing to 'Baar Baar Dekho.'

Even Shabana Azmi, who was present along with Javed Akhtar, joined the singer on stage.

#karanjohar with his mom #hiroojohar on her 75th birthday

The matriarch surely turned 75 in style and we only have her son to thank for.