SRK invited to guest star in Dirk Gently’s, seems like he is packing bags already!

SRK and a poster of 'Dirk Gently’s Holistic Detective Agency'.

Mumbai: The otherwise omniscient superstar of Bollywood, Shah Rukh Khan, is self-admittedly guilty of not knowing that ‘Dirk Gently’s Holistic Detective Agency’ is a series. The actor took to social media to make this confession and ended up getting an offer to star in it from the Producer of the show. Wow!

So it all started with SRK’s tweet upon learning that ‘Dirk Gently’ is actually a series, he wrote: Dirk Gently is a TV series!! And I didn’t know it! Woe be upon me. Sorry Adams. The pic is for no apparent reason. 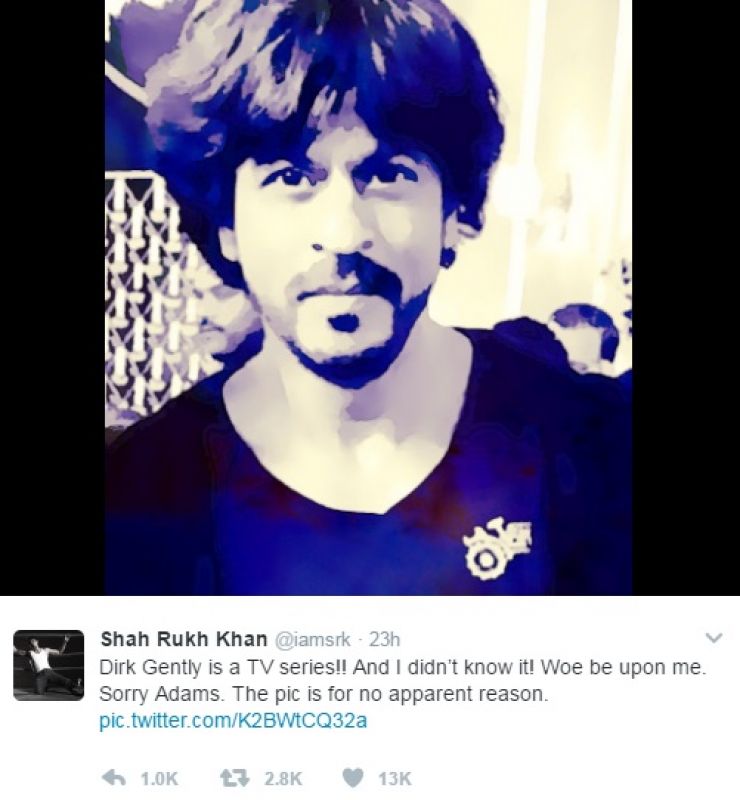 Arvind Ethan David, Executive Producer of the show, commented on SRK’s tweet in a very dashing way. He said: Amazing to discover that @iamsrk is a #dirkgently fan. Come guest star in #Season2.

Now, Shah Rukh being Shah Rukh, replied to this offer in his usual funny little way. He wrote: Let me know the time and place. Will figure out my own accommodation!

What about discussing remuneration? The superstar is clearly a generous celebrity to work with!

Jokes apart, think about it, if one of the biggest stars of the country makes an appearance on an internationally successful show as the ‘Dirk Gently’, how crazy would that be?!

The series is an adaptation of Douglas Adams’s novel by the same name. Shah Rukh Khan, do not hold back, please accept!

■Modi promised like DDLJ's SRK, turned out Sholay's Gabbar: Rahul
■Watch: Akhilesh is SRK, Modi-Nawazuddin Siddhiqui in this funny Raees parody trailer
■Raees cinematographer KU Mohanan talks about being called 'genius' by SRK
■After 25 years of knowing each other, SRK-Aamir click their first picture together
■SRK deserved Oscar for MNIK but H'wood too manipulative: Paulo Coelho
■SRK gets poetic as he takes a walk, builds sand-castles with son AbRam
■SRK booked for 'rioting' and 'damaging' railway property during Raees promotions
■Apart from Tubelight, SRK and Salman have one more thing in common this year
■Rana rules out SRK’s cameo in Baahubali: The Conclusion
■Watch: Ranveer-Ganesh do the iconic DDLJ train scene better than SRK-Kajol