Harshvardhan Kapoor claims Diljit Dosanjh made his Bollywood debut in 2008

Diljit won the award for his performance in 'Udta Punjab,' while Harsh debuted in 'Mirzya'.

Mumbai: Harshvardhan Kapoor might have won a few odd Best Debutante awards this year, but the youngster is evidently unhappy about losing out the Filmfare Award for Best Male Debut to Punjabi singer-musician Diljit Dosanjh, for his acclaimed performance in Abhishek Chaubey's 'Udta Punjab'.

The actor, who's currently working on Vikramaditya Motwane's 'Bhavesh Joshi,' had told a leading daily, "Although I picked up two debutant awards earlier, I was really looking forward to winning the black lady. But I guess every awards event has its own parameters. I'll be honest, though. I think a debutant award is meant for someone working on his first film. It shouldn't go to an actor who has worked in several films in another industry or language."

And now, the actor has taken the row to another level, by claiming that Diljit had made his Bollywood debut in a 2008 film. 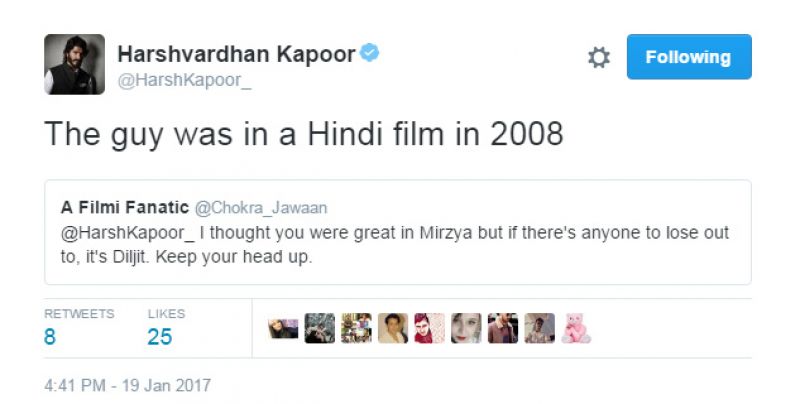 Harsh also reiterated that he doesn't believe he is entitled to the award.

Be that as it may, we still do believe a certain Jim Sarbh 'debuted' the same year as Harsh in 'Neerja'. Maybe the Black Lady for Best Debut was never meant to be his.

■All is not well between Diljit Dosanjh and wife?
■Harshvardhan Kapoor is avoiding the media, why?
■Filmfare Awards: Neerja, Kapoor and Sons, Dangal, Udta Punjab dominate