Karan Johar thought that he had impressed me with c**p, says Shah Rukh Khan

Shah Rukh Khan talks about what he thought was an utterly nonsensical story that was narrated to him by Karan Johar during the shooting of Mahesh Bhatt’s film Chaahat with Pooja Bhatt.

Khan’s comments were made at a grand event to commemorate 20 years since the release of Kuch Kuch Hota Hai on October 16, 1998. The cast and crew from the film were present, as were others from the Dharma Productions’ stable, along with friends and relatives.

“I was at the hotel for the shoot of Chaahat and Karan came down and sat on the steps and narrated the story to me. It was utter c**p and nonsense, and not like the film you finally saw. He thought that he had impressed me with a c**p story. He still feels I don’t know the story of the film. Later, he and Kajol came again and narrated the script to me in the room. I didn’t hear anything because the moment he would start narrating, Kajol and he would start howling. I only heard two imbeciles crying,” chuckles SRK at the memories around one of the most popular films in Bollywood. 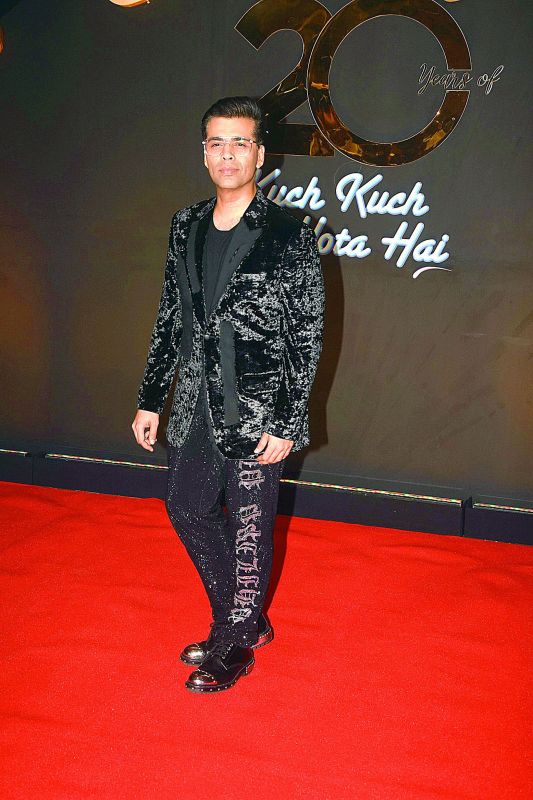 Kajol quickly jumps in,  “In our defence, we thought that we were making a fabulous film. And I felt, ‘oh this is so cool’ every time he narrated a scene.”
Shah Rukh interjects.

“Thank god, I didn’t listen to the narration and didn’t give inputs, or else the film would not have been made this way,” admits the actor.

Shah Rukh also recollected what ‘Uncle Tom’ as Karan’s father Yash Johar who produced Mahesh Bhatt’s Duplicate told him, “Sometimes our best is not good enough. That does not mean that we should relent and let go.”

In fact, Karan’s mom Hiroo told me, “Please see that he keeps the camera in the proper place and I was constantly looking out for that,” guffaws Shah Rukh again.
The event was attended by Kareena Kapoor, Rani Mukerji, Sidharth Malhotra, Varun Dhawan, Janhvi Kapoor and a host of others.