The two had earlier collaborated in 'Shuddh Desi Romance'.

The actor, who'd recently taken to his social media feeds, to flaunt his guitaring skills, is reportedly playing a musician in the drama.

Parineeti, who herself has been busy filming 'Meri Pyaari Bindu,' alongside Ayushmann Khurrana, joined Sushant on a reading session for the Homi Adajania directorial.

She took to twitter to announce the same and also shared an absolutely adorable snap of the two in their elements. 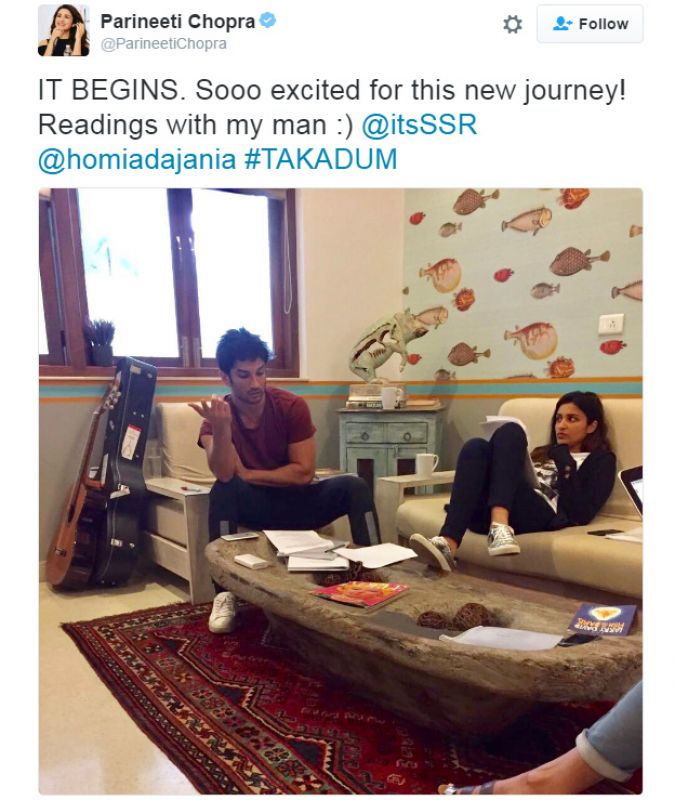 Sushant, who had also shared a video of him wielding his guitar skills, also took to the instrument along with his co-star, who herself has crooned a song in 'Meri Pyaari Bindu'.

A video of Sushant playing the guitar while the perennially bubbly Parineeti cheers on, has already found its way onto social media platforms.

'Takadum,' touted to be an intense drama, will have the lead pair collaborating with Irrfan for the first time.

#Takadum prep has begun!!! In case some of you have forgotten, Takadum was announced some months ago starring @parineetichopra @sushantsinghrajput and Irfan Khan! Directed by @homster I'm so excited! Look at them 😭😍 I've wanted this couple back on screen for so long! So glad to have them back! Wishing them all the luck in the world on this new journey! ❤️🙏

Tom Hanks, Rita Wilson return to US after coronavirus quarantine in Australia