Actor Sunny Leone reacts in awe as huge crowds jostled to catch a glimpse of her in Kochi on Thursday. The popular actor was in the city for the launch of a new shop of a mobile phone retailer. (Photo: ARUN CHANDRABOSE)

Kochi: The Kochi police and the civic administrators  were  caught napping as hundreds of thousands of people converged near the Maharaja’s college ground junction at MG Road on Thursday to see  popular 'sexy' actor Sunny Leone. The huge crowd  created a mayhem and endless traffic jam  in the city  for hours. The police intelligence system had failed to  anticipate  the convergence of such a massive  crowd at  a major junction and take precautionary  measures. 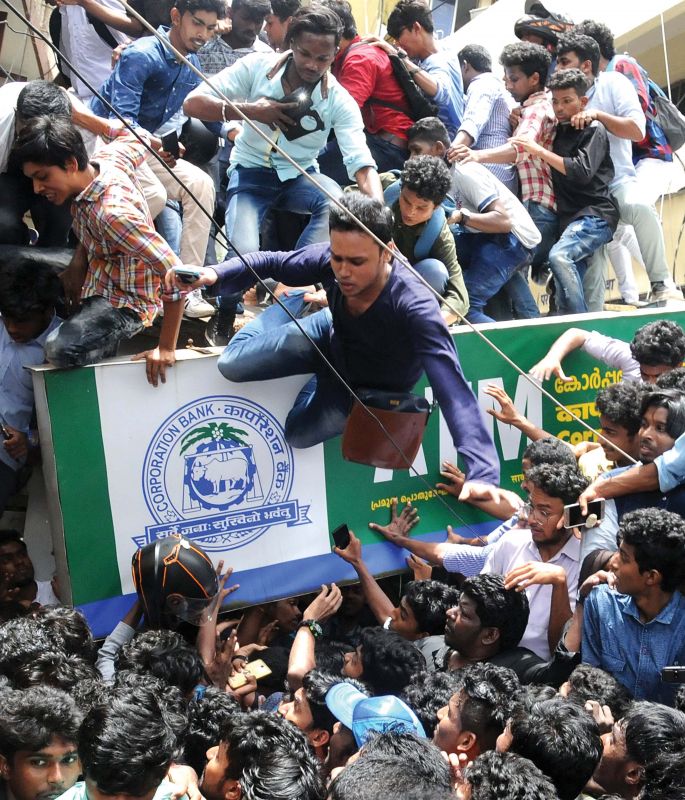 A youngster falls from over an ATM kiosk which collapsed when people climbed on top of it to have a better view of the actor.

The actor was in the city for the launch of a new shop of a mobile phone retailer. Stung by criticism from various quarters on the inept handling of the situation, the police  acted late in the evening by registering a case against the mobile phone shop owner and a few other unrecognised persons for disrupting the city traffic. The central police also said that fines will be imposed on those found guilty of unauthorised parking of vehicles.

The surging crowds went berserk in their eagerness to see the glamour actor  and demolished everything before them. Several two-wheelers parked on the roadsides were damaged while city buses caught in the jam were used as  platforms to have an aerial view of the spectacle. The Kochi Metro  also suffered losses as the barricades erected at  MG road as part  of city beautification were  uprooted by the crowd.