Shraddha Kapoor loves rains and here's all you need to know about this relationship!

Mumbai: One of the most talented actresses of Bollywood, Shraddha Kapoor has a strong and charming connection with the drizzling rains and the testimony to the same is some of the most iconic memories that the actress has given us! To prove it all, the actress calls it her season and loves and surely is making the world swoon over her some of the memorable playful sequences, giving us a glimpse!

Recently, the actress took to her social media to share a picture which was posted by her fan club. The picture is a collage of all the most iconic moments when the actress was happily shooting in the heavenly rains and she wrote, "My season is here 😝🤣😂 ". The actress looks happy and giggly in all the glimpses and surely reminds us of all her hits, playfully drenched in the rains. It’s incredible how she has become a unanimous favourite amongst the fans- from Aashiqui 2 to Baaghi, Shraddha stays synonymous with the heavenly monsoons! 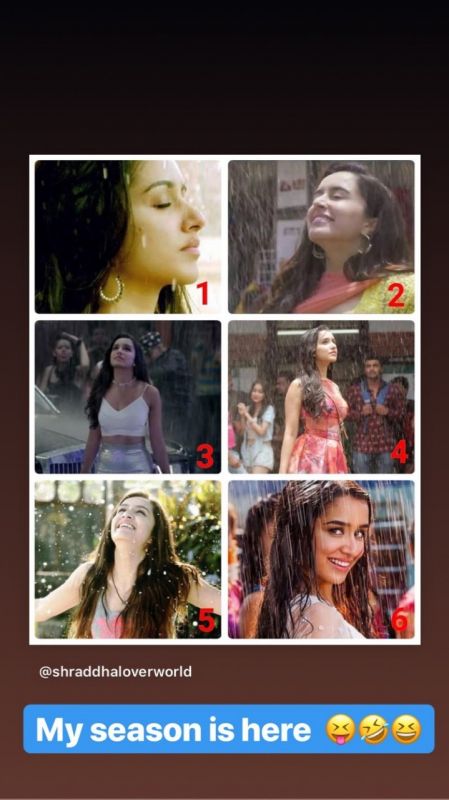 The actress has given some of the most iconic  songs under the drizzles in films namely, ‘Aashiqui 2’, ‘Ek Villian’, ‘Baaghi’ and ‘Half- Girlfriend’. Surprisingly, all these songs became the most loved songs of the season and they depicted romance and rhythm which also makes the actress, the most relatable actress from Bollywood. Shraddha danced like a star in all of them and impressed her fans to the fullest. She was definitely successful in creating a rage with all these melodious dance sequences and has won over the hearts of her fans!

The Stree actress who, time and again treats her audience with her infectious selfies, her workout and style goals. Her presence across social media is immense and she continues to be the most- liked persona all across.

This year, the multitalented star is busy shooting multiple films and is busy hopping from one set to another, slipping into diverse characters to ace her roles.

Her upcoming action-drama Saaho will witness the actress in an action-packed avatar where Shraddha will be essaying the role of a cop, while Chhichhore tests her versatility with dual roles of a college student as well as a middle-aged woman. Street Dancer will showcase the actress in a completely new dance avatar.

With multiple releases this year, Shraddha Kapoor also has an anticipated release with Baaghi 3.