Mumbai: It was the 128th birthday of the world’s most celebrated comic actor, filmmaker and composer Charlie Chaplin on April 16.

On the occasion of his birthday, Sonam posted a childhood picture of herself dressed in the attire of legendary Charlie Chaplin.

Quoting Charlie from his iconic film ‘The Circus’, Sonam wrote, "You'll never find a rainbow if you're looking down."

She further expressed her love for Chaplin saying, "When little girls wanted to be princesses I wanted to be Charlie Chaplin. Happy birthday Charlie, I never look down and walk, I never forget that a day without laughter is a day wasted and that life might be tragedy when seen in close-up but a wonderful comedy in long shot."

Here is the picture which Sonam posted on Instagram: 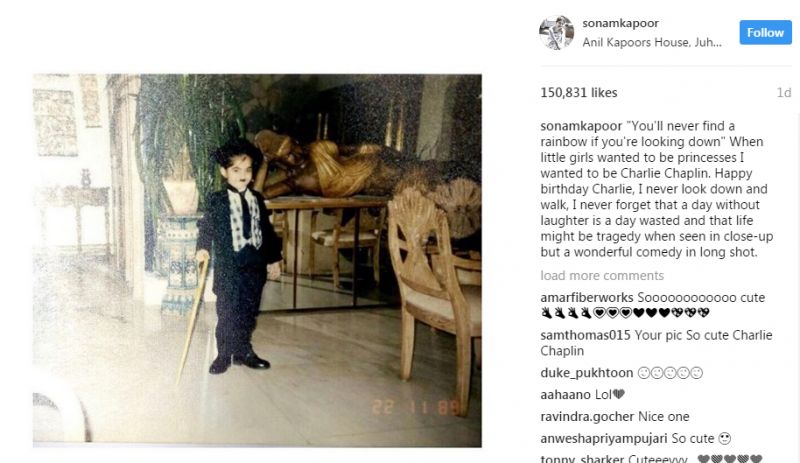 The actor recently received a Special Mention at the 64th National Film Awards for her stellar performance in 'Neerja'.

Talking more about on work front, Sonam is currently shooting for her upcoming film 'Padman' with Akshay Kumar and Radhika Apte.

She is also a part of Sanjay Dutt’s biopic and will kick start shooting for sister Rhea Kapoor’s 'Veere di Wedding' with friend Swara Bhaskar and Kareena Kapoor Khan.

■Exclusive: Sonam Kapoor only has a 7-minute cameo in Sanjay Dutt biopic?
■Sonam Kapoor is in the race to join supermodel Gigi Hadid for an event in India?
■Throwback moment: Deepika repeats her 2012’s outfit at Oscars!
■Throwback: This picture of SRK with an infant Aryan will give you warm fuzzies
■Throwback Thursday: Virat Kohli shares rare picture of himself from junior days
■Throwback: Picture of Big B adoring an infant Abhishek gives you warm fuzzies