Hrithik Roshan will appear in a cameo in ace celebrity designer Vikram Phadnis’ directorial debut, Hrudayantar, a film that deals with family ties and relationships. Contrary to audience expectations and speculations, the Koi Mil Gaya star will not do a song and dance number, as confirmed by Vikram himself. In fact, Hrithik’s role will spring a huge surprise to the audiences and will be crucial to the story, despite his brief appearance. Filmmaker Vikram Phadnis recently spoke about this, while talking about the superstar’s presence in the film and his relationship with Hrithik over the years.

“Hrithik will be seen in a very meaningful cameo — a role that is etched for him alone. It is essentially brand Hrithik and one that will leave the audiences spell-bound. No other star could have played the role. Moreover, it forms a pivotal part of the story,” says Phadnis. Apparently Hrithik was sounded off about the role well in advance. “He read the entire script and then took a call on the role. He was clearly excited about it,” Phadnis said. According to him, Hrithik was among the many stars in the industry with whom he shares a great equation, “My relationship with Hrithik is over 15-20 years old. He is among the many great friends with whom I share a great rapport,” he elaborated. 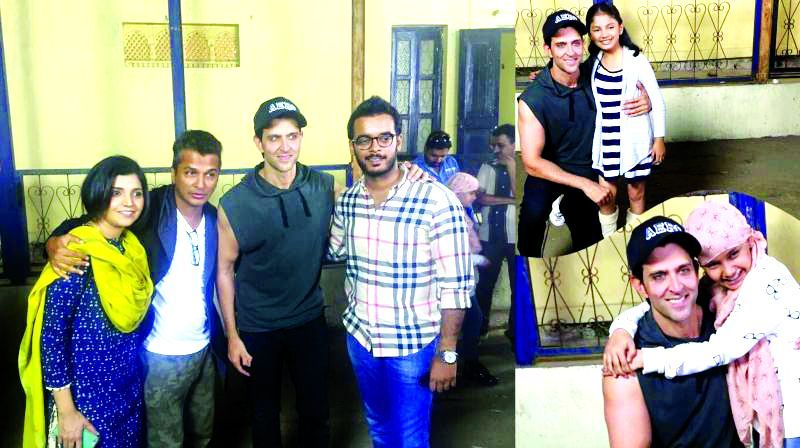 Hrithik and Vikram with the cast of the movie

It may be recalled that besides Shah Rukh Khan, who gave the clap, several celebrities were present at the mahurat of the film, including Abbas-Mustan, Arjun Kapoor and Malaika Arora. Hrudayantar will also see the behind the scenes contribution of several noted Bollywood technicians, including Shiamak Davar, who will be seen in a live concert in the film. “I am very happy with the way my friends from the industry have come out in support whether it was Shah Rukh, Farah Khan,  Arjun Kapoor, and above all, Shiamak Davar, whom I have known for over 25 years,” Phadnis revealed. Hrudayantar, stars veteran Marathi actors Subodh Bhave and Mukta Bhave in the main lead, and has been produced by Vikram Phadnis Productions in association with Young Berry Entertainment.