Mumbai: Actresses today get agitated and call it sexist when they are queried about catfights and rifts with other female member of the cast or friends.

While most of it might not be true and may be figment of someone’s imagination or a PR exercise, the fact that some actresses do share cold vibes can’t be denied.

One such actress duo is Katrina Kaif and Deepika Padukone.

The two are known to be ‘foes’ or in a rift for close to a decade now, ever since Ranbir Kapoor allegedly dumped Deepika for Katrina around the time ‘Ajab Prem Ki Gazab Kahani’ released in 2009.

Though the two don’t take digs at each other like Sonam and Deepika used to during their rift, the two have perhaps never been snapped together in the same frame or came face-to-face at any event all this while.

Amid this decade-long ‘war’, Deepika shocked everyone by wishing Katrina on her birthday on Monday.

The actress left a comment wishing her good health and happiness on the birthday girl’s Instagram picture, where Kat jokes about it being her 21st birthday.

Alia shared a picture of the two dressed in boxing attires with BFFs written behind, a picture from their shoot for a TV show about friends.

Also read: Alia is in zone in Ranbir's life that neither Deepika, Katrina entered, here's proof 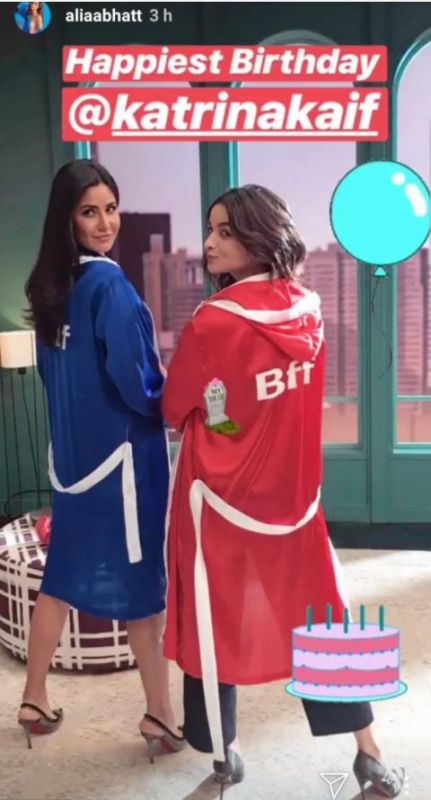 Rumours of rift between the BFFs at one point went on an overdrive since the new couple made it official with frequent appearances.

But Katrina wishing Alia for the Rs 100-crore ‘Raazi’ success was considered as the ‘all is well’ sign.

But they don’t hang out that often nowadays, like their earlier gym sessions and more, but that's something they probably can’t with Ranbir around.

Also read:  I bet Ranbir's count is more than 10: Sanju on girlfriends, reacts to own 308 tally

Deepika and Alia are known to be good friends anyway, so can Ranbir finally be okay about his exes and current love all being okay with each other?

■Alia is in zone in Ranbir's life that neither Deepika, Katrina entered, here's proof
■Brahmastra: Nagarjuna joins team with Amala in Bulgaria; Ranbir photobombs Alia
■Happy birthday Katrina Kaif: 5 amazing qualities we must learn from the actress
■When Janhvi Kapoor was Om Shanti Om’s Deepika and Khushi stepped into SRK’s shoes
■I bet Ranbir's count is more than 10: Sanju on girlfriends, reacts to own 308 tally

From Majnu to Dawood

Salman Khan rushes to announce next