New Delhi: New pictures of Taimur Ali Khan are making a sensation on the Internet as the son of actors Saif Ali Khan and Kareen Kapoor dressed in Team India's colours surfaced online.

The adorable picture of the little munchkin donning Team India's Blue jersey and saluting the Indian team for their victory over Pakistan has taken the internet by storm.

Taimur a popular star kid enjoys a huge fan following and is popular with photographers too who love to click him. 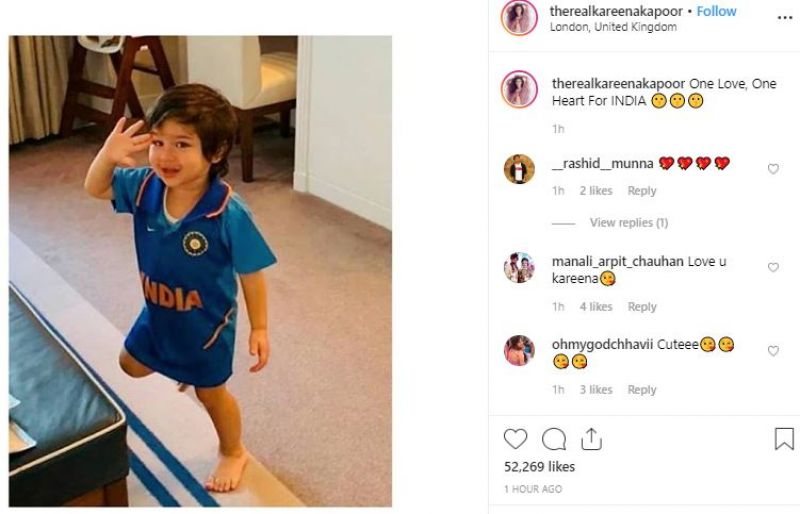 Saif who is currently shooting in London joined several enthusiastic fans to cheer the Men in Blue at the ICC World Cup 2019 India versus Pakistan match at Manchester yesterday.

Going down the memory lane, Saif told ANI "The match between India and Pakistan is fantastic and especially in school and college as we use to take it as a big game and used to be a very special day."

On the work front, the shooting for the film 'Jawaani Jaaneman' will commence this month in London. The film also stars Tabu in a pivotal role. The 48-year-old is also busy preparing for his role as a 'naga sadhu' for his upcoming film 'Laal Kaptaan'.

He will also be seen essaying the character of cop Sartaj Singh in the second season of the much-awaited crime thriller web series 'Sacred Games 2'. His character in the series is on a mission to uncover a terror attack in Mumbai in 25 days.