Mumbai: The second season of 'Quantico' is coming to an end. Priyanka Chopra, currently busy in shooting the hit-TV series, took to her twitter and confirmed the news of ending of season two's filming.

She wrote, "Last 2 episodes before we finish shooting for the rest of #quantico season 2! So many mixed emotions..it's been a long haul..." 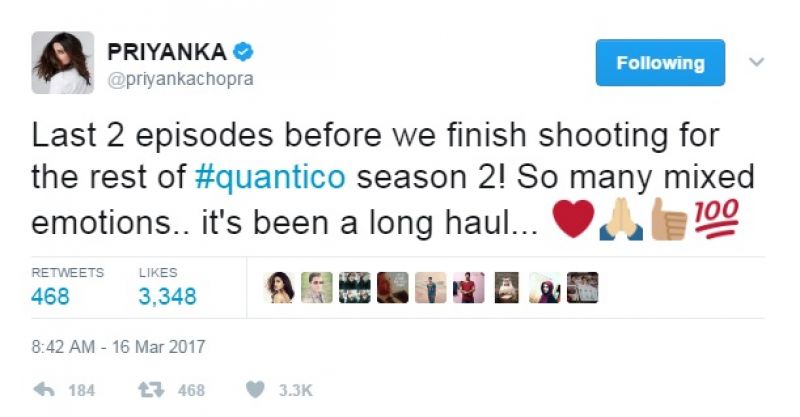 The show enjoyed a massive following in its first season and cemented PeeCee's place in Hollywood.

Recently, the ' Bajirao Mastani' star visited 'The Tonight Show with Jimmy Fallon' to promote 'Quantico' and played Holi with the host, Jimmy Fallon.

On a related note, Priyanka Chopra will be making her Hollywood movie debut with Seth Gordon's directorial ' Baywatch,' alongside Dwayne Johnson and Zac Efron.

■Priyanka’s Quantico continues to perform poorly, most likely to be dropped?
■Not Ryan Booth, Priyanka to romance Owen Hall in new season of 'Quantico'?
■Priyanka discharged from hospital after suffering injuries on Quantico's set