Watch: Will Smith has something to say to Ranveer Singh after watching 'Gully Boy'

DECCAN CHRONICLE.
Published Feb 16, 2019, 5:58 pm IST
Updated Feb 16, 2019, 6:00 pm IST
The film that has garnered a huge acknowledgment in West has been receiving immense love and appreciation back home in Bollywood.

Will Smith posted a story on his official Instagram handle where he congratulated Ranveer Singh and expressed how he liked the actor's excellent rap skills and his efforts to take old school hip-hop to the world level.

The film that has garnered a huge acknowledgment in West has been receiving immense love and appreciation back home in Bollywood. The legendary actor Anil Kapoor also has praised the Gully Boy director Zoya Akhtar and posted a special story for her on his official Instagram account.

Anil Kapoor captioned the story, "@zoieakhtar you are a mastermind! #GullyBoy is a film that hits all the right notes with its captivating storytelling, direction, acting and songs! It's your time and how! Setting new benchmark with every film! Simply amazing!" 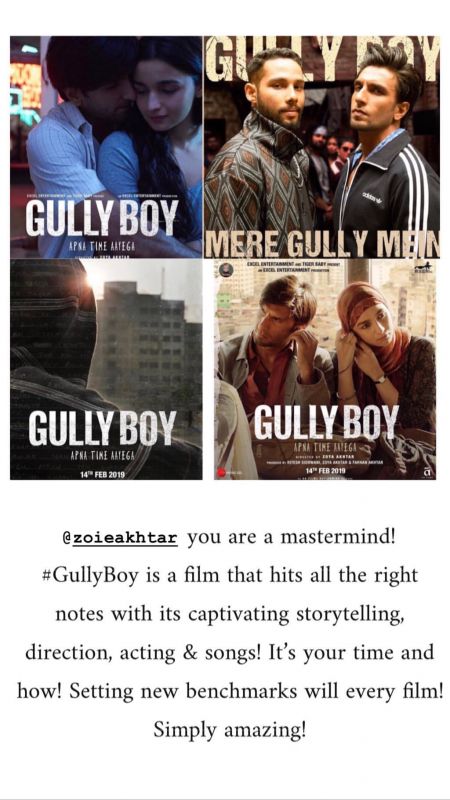 Zoya Akhtar who has been ahead of her times with films Luck By Chance, Zindagi Na Milegi Dobara and Dil Dhadakne Do is now all set to rule the box office with Gully Boy which is making all right noise across quarters.

Gully Boy is a story inspired by slum rappers of Dharavi, Gully Boy has gone ahead to create immense buzz amongst the masses. The trailer, the music and now the early reviews post its screening at the Berlin Film Festival has created a lot of anticipation for this Zoya Akhtar's film.

Starring Ranveer Singh as the street rapper, Gully Boy stars Alia Bhatt as his love interest bringing to the screen the fresh chemistry of the duo. The film also stars Siddhant Chaturvedi and Kalki Koechlin in pivotal roles.

Directed by Zoya Akhtar, Gully Boy is produced by Ritesh Sidhwani and Farhan Akhtar under the banner of Excel Entertainment in association with Tiger Baby and this film on the underground rap movement in India has been released on 14th February.