'Chhapaak' is one of most important films of our time: Janhvi Kapoor

New Delhi: Meghna Gulzar directorial film -- Chhapaak -- is receiving nothing but all the good words from the movie enthusiasts. The new talk of Bollywood Janhvi Kapoor on Wednesday said 'Chhapaak is one of the most important films of our time.'

The 22-year-old star hopped on to Instagram and shared a poster of the 'Chhapaak' that featured Deepika Padukone and wrote 'Brave, sensitive and soul-stirring.'

Tagging the makers and the lead cast of the flick, she further wrote: 'One of the most important films of our time...thank you for this." 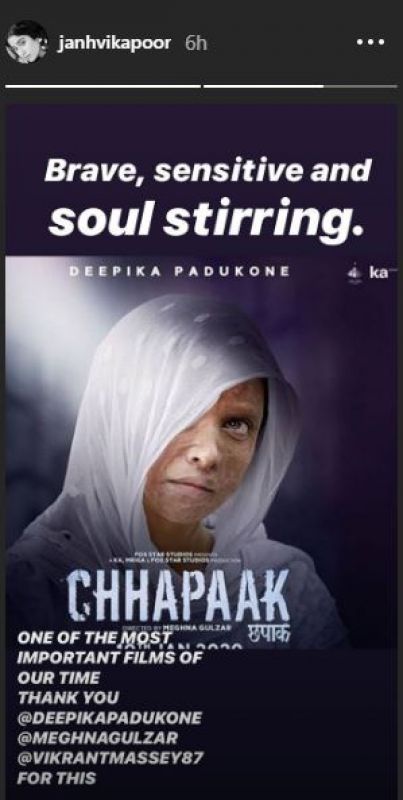 The movie, released on January 10, has got great reviews from the moviegoers of Amritsar and Varanasi. People gave their opinion on the film to ANI on Sunday, where they praised the movie for its concept, social cause and the tremendous performance of Deepika.

Despite caught between controversies, and the threat of boycotting the film after Deepika Padukone visited the JNU campus extending her support towards the student community a day ahead of the movie's release, the film has received immensely a warm response.