We had a fallout because Kareena asked for too much money: Karan Johar

Kareena's request didn’t go down well with Karan, who then approached Preity Zinta for the role.

Mumbai: So far, Karan Johar’s autobiography ‘An Unsuitable Boy’ has made headlines all over the country, thanks to the filmmaker’s honest controversial confessions. Apart from his tiff with Shah Rukh Khan and Kajol, the book also throws light on his fight with Kareena Kapoor Khan, who is currently his BFF.

In the book, KJo reveals that due to some disagreement on money issue, the two didn’t speak for a year. Apparently, Karan offered ‘Kal Ho Na Ho’ to Kareena, who expressed her desired to be paid same as her co-star Shah Rukh Khan, which didn’t go down well with Karan, who then approached Preity Zinta for the role.

“My first problem was with Kareena. She asked for too much money and we had some kind of a fallout at that time. Mujhse Dosti Karoge! had just released, directed by Kunal Kohli. She said, ‘Aditya Chopra’s assistant Kunal Kohli has made this flop, so Karan Johar’s assistant, Nikhil Advani is not to be trusted either’. The weekend of Mujhse Dosti Karoge’s release, I offered her Kal Ho Naa Ho, and she asked for the same money that Shah Rukh Khan was getting. I said, ‘Sorry’. I was very hurt. I told my father, ‘Leave that negotiation room’ and I called her. She didn’t take my call, and I said, ‘We’re not taking her.’ And we signed Preity Zinta instead. Kareena and I didn’t speak to each other for almost a year. For a year, we looked through each other at parties. It was very idiotic. She was a kid; she’s a decade younger than me,” Karan has written in the book. 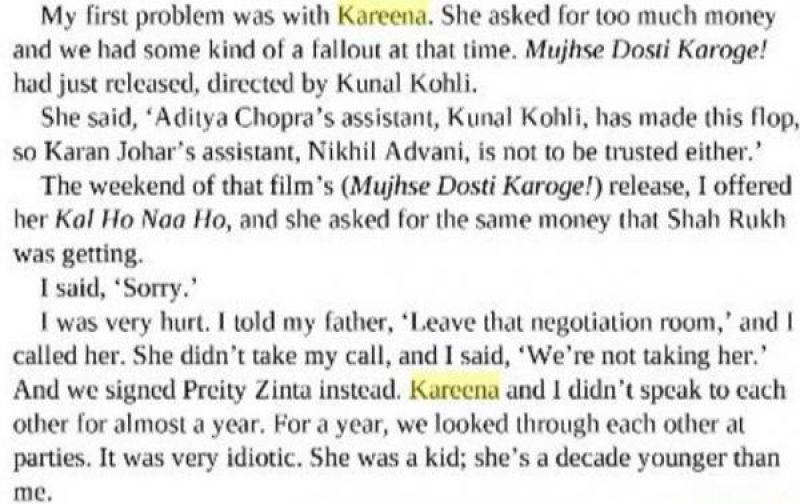 However, almost after a year, Kareena broke her silence and called Karan, and rest is history.

“We were releasing Kal Ho Naa Ho in November. We had shot the film in June, July, August and in September, I had to shoot the songs, make the promos and so on. So I had to head back, while my father continued the treatment in New York. That was the time Kareena Kapoor called me. It was August. We had not spoken for nine months. She called and said, ‘I heard about Yash uncle.’ She got really emotional on the phone, and she said, ‘I love you and I am so sorry I haven’t been in touch. Don’t worry.”