Sidharth was last seen in 'A Gentleman'.

Mumbai: Sidharth Malhotra’s contemporary Varun Dhawan, who debuted alongside him in ‘Student of the Year,’ is yet to deliver a flop and has commendable blockbusters to his credit. However, the same can’t be said about Sid.

The actor, whose last two releases, ‘Baar Baar Dekho’ and ‘A Gentleman’ have been colossal disasters, has all his hopes pinned on ‘Aiyaary’.

However, his shaky career seems to have gotten to Sid, as he posted a sinister tweet, which has alarmed his fans to no end.

The actor is also reportedly going through a widely covered break-up with co-actor Alia Bhatt.

Sid has changed his bio, hinting at an indefinite sabbatical and also changed his profile images to black. 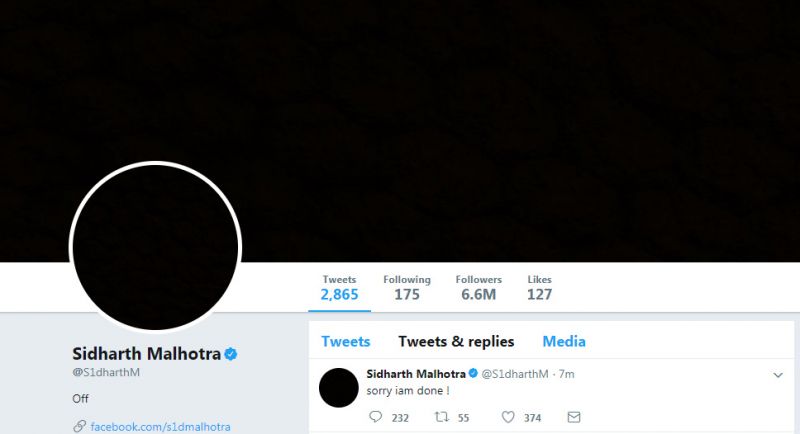 We would like to believe it is a promotional strategy for his upcoming film, though.

■Sidharth and Alia didn’t even interact at Ambani’s recent party
■Won't mind going nude if the script demands it: Sidharth Malhotra
■Despite clarion call for boycott, Sidharth to perform at IFFI closing ceremony

How Vikram Bhatt hacked his actors