Akshay was last seen in Subhash Kapoor's 'Jolly LLB 2,' which grossed over a 100 crores.

Akshay took to Twitter to share an adorable snap of himself with Twinkle, also informing the start of shoot. 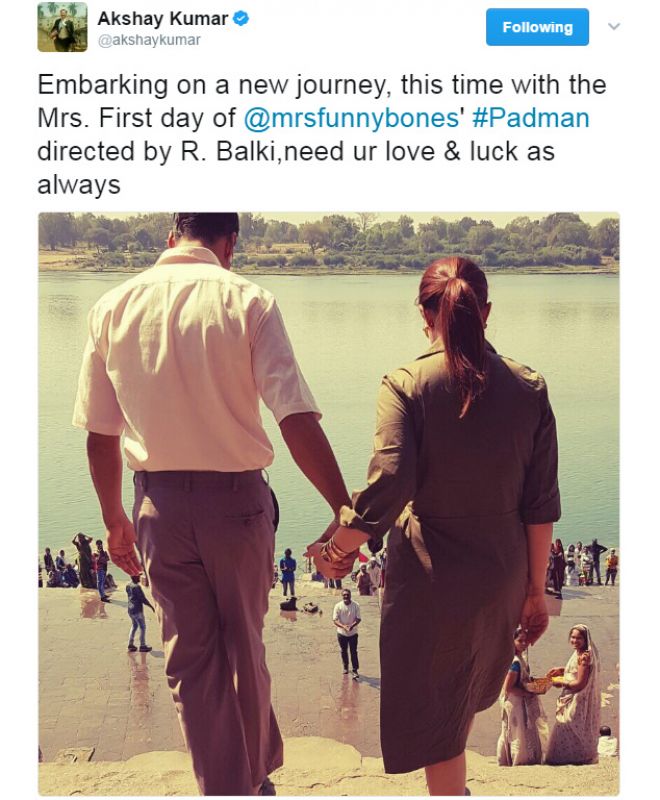 Twinkle turns producer with the film which is based on the story 'Sanitary Man,' from her recently released book, ‘The Legend of Laxmi Prasad'. The story revolves around Arunachalam Muruganantha, who campaigned extensively for menstrual hygiene in rural India and was known as the Sanitary Man.

Akshay who has been widely appreciated for his recent choice of films, will next be seen opposite Bhumi Pednekar in 'Toilet- Ek Prem Katha'.

■Exclusive: After Padman, Radhika bags second film with Akshay Kumar
■Balki wanted to cast Dhanush in place of Akshay for Padman?
■Confirmed! Sonam Kapoor and Radhika Apte to be Akshay's leading ladies in Padman
■Akshay Kumar is only the hero of Padman: Director Balki
■I did not have the heart to turn down Akshay and Twinkle: ‘Padman’ Muruganantham
■First look: Twinkle’s first production Padman brings together Akshay, Balki