Om Puri in a still from the film.

Mumbai: The Censor Board has again pulled a tough one by refusing to grant a certificate to the late legend Om Puri’s ‘Rambhajjan Zindabaad’.

The board cited direct and indirect references to the politics of the state of Uttar Pradesh as the primary reason.

The Ranjeet Gupta directorial produced by Khalid Kidwai had been slated for a January 13. But the demise of the legendary actor forced the makers to push the release to February.

The film, which had been submitted for approval in December had been outrightly rejected. The Pahlaj Nihalani headed revising committee also deemed it inappropriate for its political bluntness.

“The theme of the film is based on rape. The film is explicit with abusive language. There are direct-indirect references to politics. The committee found certain 'adult conversation degrading to women.' They also pointed to double innuendos and provocative lines with respect to caste and community. The theme and presentation is not suitable for public exhibition and hence recommended `refusal' of certificate under the guidelines," the CBFC stated in its letter. 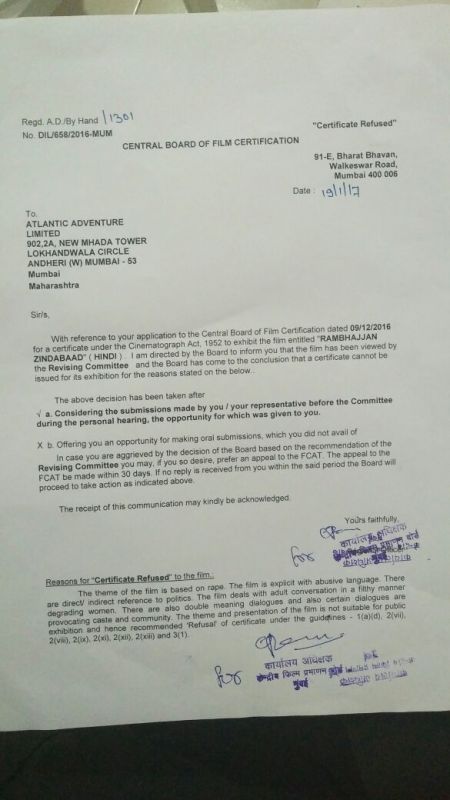 The film has Puri playing a compounder while Kulbhushan Kharbanda plays a character that holds striking semblance to PM Narendra Modi, as per Nihalani.

■Om Puri: The star that didn’t act like one
■Varanasi declared a tribute to Om Puri