I lost out on maintaining my relationships with Ammi, kids, Reena and Kiran: Aamir

Superstar has been working hard since his teenage years. In the bargain to become the perfectionist he is today, the superstar forwent all the magical moments of adolescence that most people cherish. When asked what he has gained and lost on his journey to super-stardom, Aamir says, “Hmm… I will have to sit back and list what I’ve lost. I have gained a lot of love, respect and popularity from my audiences and fans. What I lost is a million dollar question! I started working at the age of 18. Professionally, I got so engaged that I could hardly give time to my Ammi. Yes! A little later in life, after I got married and became the father of Junaid and Ira, I didn’t have much time for them either — owing to my busy schedule. I surely lost out on maintaining my relationships with my Ammi, kids and wife Reena, and now Kiran as well.” 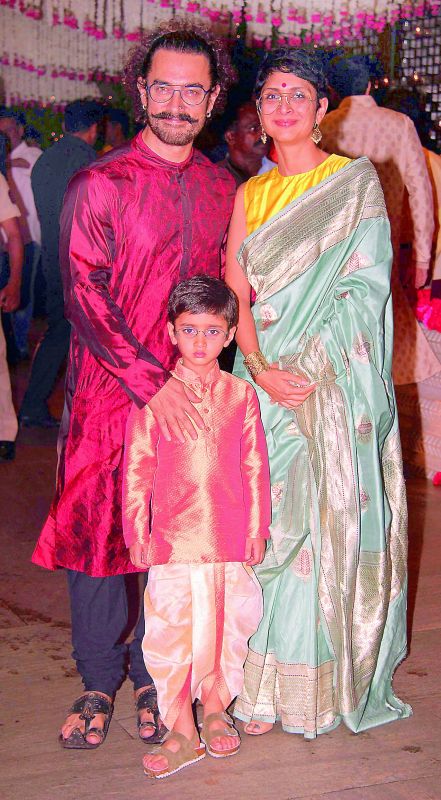 However, the 52-year-old is trying to make amends — as they say ‘better late than never’. “Now I have decided to give enough time to Azad. His timings with me have been religiously scheduled from 6 to 8 pm. I have to spend quality time with him. I feed him and play with him. I also narrate or read some stories to him along with Kiran,” shares Aamir.

Sharing more about the apple of his eye, Azad, Aamir says, “Azad loves to play outdoor games like cricket and football. I have added about half an hour’s time in his schedule for television. He decides what he wants to watch during this time.”

Going back to Junaid and Ira, his children with first wife Reena, Aamir reveals that he never allowed them to own a mobile phone at an early age. “I remember having instructed Junaid to start using a mobile phone only when he would be capable of paying his own bills. However, when he started going to college, his mother Reena wanted him to possess a mobile in order to be in touch, as Junaid used to travel by train back then. It depends on the parents… how they inculcate  ethical values in their kids. I, too, personally do not use the mobile much. During my meetings too, I refrain from checking my mobile. Usually, we get addicted to mobiles so much that we start using them 24*7. It’s not a good habit,” Aamir narrates.

Mentioning that his eldest son, Juanid, loves to act in plays, he adds, “Theatre does not help him earn money, so he works as an assistant director for commercials so that he can make his pocket money.”

And what if the kids want to work in the industry? “Junaid can join me any time! In fact Junaid has worked with Raj Kumar Hirani. Ira is studying now and we will see what she would like to pursue. As a parent I am always with them.”

Going back to where the conversation began, does the suave Aamir still regret not having spent enough time with the family? The intelligent perfectionist says, “I did miss out on a lot, I am sure; but I do not regret it. Simply because both my children Junaid and Ira are very close to me and we share a great relationship even now.

If we had not shared a great relationship then that would have been sad. Ammi also, I do visit her on and off. I’m there for all of them at critical times, but that’s not enough na? I am happy that they all understand me. If our relationship would have been fractured then I would have felt bad. We all need to maintain a balance between work and personal commitments. I am sure all men and women will resonate with this thought of mine.”