Karan had directed the veteran in 'Student of the Year'.

Mumbai: The songs of Karan Johar's 'Ae Dil Hai Mushkil' have been doing phenomenally well, and with the release of the ' Breakup Song' the soundtrack is well on course to bust the charts.

The song, rendered by Arijit Singh, Badshah, Jonita Gandhi and Nakash Aziz, already has gone viral on the internet and fans can barely stop looping it.

But turns out they aren't the only one hooked to the OST.

Rishi Kapoor took to Twitter to laud the songs, composed by Pritam. He called every song of the film terrific and congratulated Karan, on the same.

The film, starring Ranbir Kapoor, Anushka Sharma and Aishwarya Rai Bachchan in the lead roles, will be Karan's first release after 'Student of the Year', which incidentally also starred Rishi Kapoor.

Karan thanked Rishi for his gracious tweet and sought blessings from him. 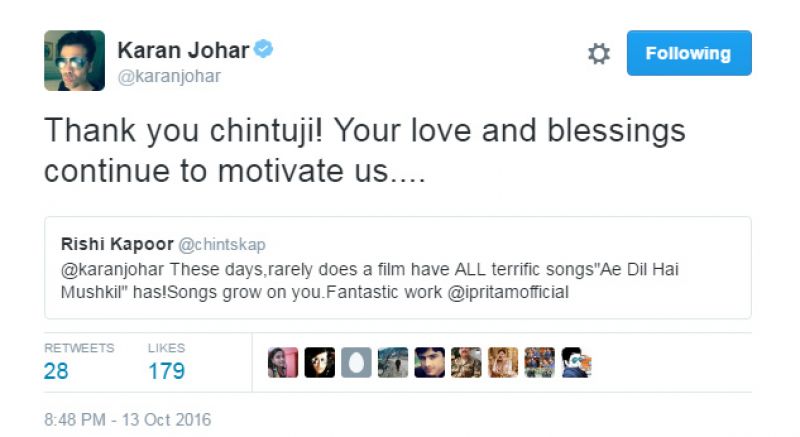 We absolutely love this bonhomie and can't wait to watch the two work again on a film.