Arjun Kapoor, after completing his ‘Namaste England’ shoot, has found time for his now one family – Janhvi Kapoor, Boney Kapoor and Khushi Kapoor.

The actor, who bonded with Sonam Kapoor Ahuja on her birthday tagging along with sister Anshula, once again spent a day with his sister after his London shoot wrap.

He shared a photo of them, captioning it, "I think life’s just better in #blackandwhite!!! @anshulakapoor #lastday #londonsummer"

Janhvi Kapoor also left a comment on that writing, "And when you're on your way to get some nalli nihari!!!!!!!!!" 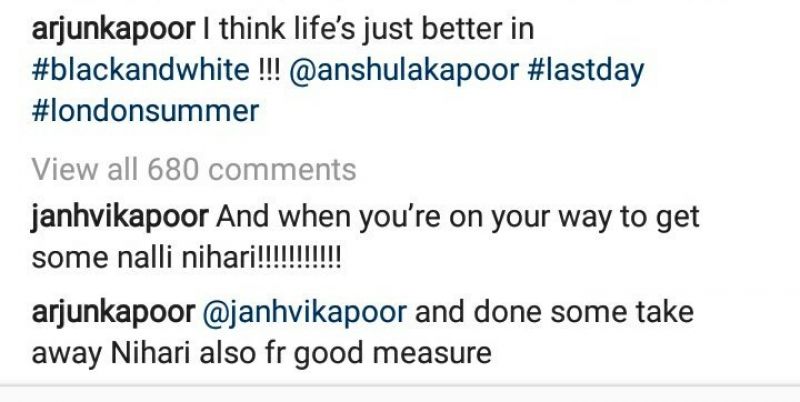 Interestingly Janhvi, Khushi and Boney Kapoor also flew down to London as a part of their Europe trip which will end on June 17.

Confirming the news Boney told Mumbai Mirror, “Yes, we are in London for five-six days. Janhvi and Khushi are with me, Anshula had arrived earlier. Arjun will spend a day with us before leaving for Mumbai.”

Arjun is now back in Mumbai and as usual, he has been pulling his co-star Parineeti’s leg soon after arriving!

#ArjunPariBanter 😍😂👌@arjunk26:Uff even at the airport she s copied me & my color pallete@ParineetiChopra:You were the one waiting for me near the baggage belt. Dying to meet to me always

Pari: Grumpy and me
Arjun: I'm in shock that tumh India mein re-entry kaise mil gayi !!!
Pari: And I'm happy because no meeting you for ten days. ITNA PEACE
LOL @arjunk26 @ParineetiChopra U guys are clearly missing each other... And so are we💕#ArjunPari 👫 #Arjuneeti Forever💞 pic.twitter.com/GsL6R038Ob