New Delhi: Twinkle Khanna, who is making her debut as a producer with 'Padman,' has shared an interesting picture of the person who made this movie a reality.

The 43-year-old actor-turned-producer took to Twitter and shared a picture, where Akshay Kumar and Twinkle are seen posing with Arunachalam Muruganantham.

The movie is a biopic on Arunachalam, a small town entrepreneur from Tamil Nadu, who invented low-cost sanitary napkins to generate awareness in rural areas.

She captioned the snap, "On the set today with the real and reel life Padman and our brilliant director Balki #Padman #MrsFunnybonesMovies."

The photo also features Arunachalam's family and the director of the movie R Balki. 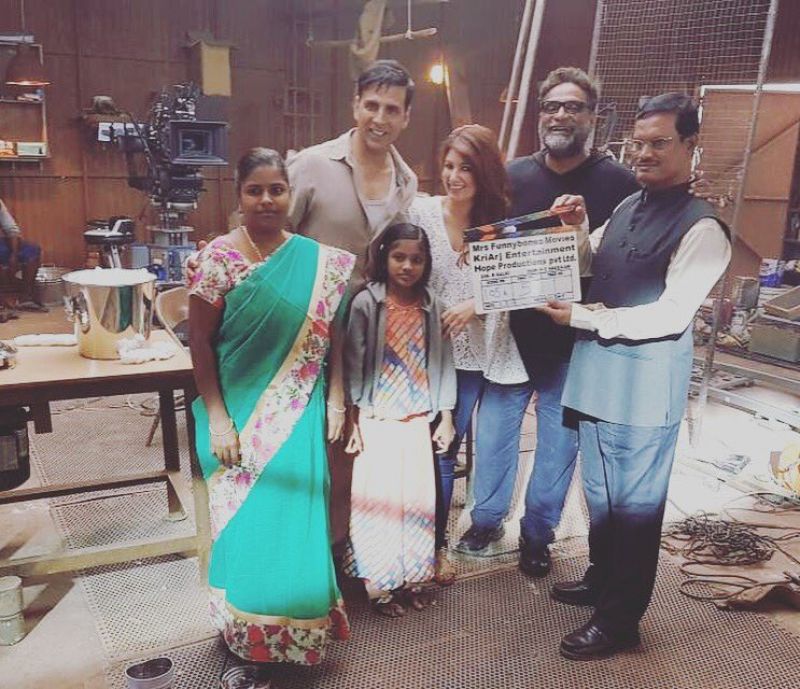 Helmed by R Balki, movie 'Padman' also stars Sonam Kapoor and Radhika Apte in pivotal roles, while Amitabh Bachchan will be seen doing a cameo in the movie which will release on May 12.

■This is how Akshay, Sonam and Balki are beating the heat on the sets of Padman!
■Pics: Amitabh Bachchan, Akshay and Sonam shoot for Padman!
■Amitabh Bachchan confirms cameo in Akshay Kumar-R Balki film Padman
■Akshay and Sonam express shock for their National Awards on Padman sets
■Pictures: Akshay Kumar and Radhika Apte start Padman shoot in Indore