Jacqueline Fernandez with Shweta Menon during the Jacqueline Builds program.

Aluva thuruth, a quite hamlet in Ernakulam district that is slowly recovering from the recent floods, is in a festive mood. At the venue, a construction site, the flex of Bollywood actor Jacqueline Fernandez carrying a brick adorns the entrance. On the other side, a group of women is getting ready for chendamelam. They are here to welcome Jacqueline, who is in Kerala to launch Jacqueline Builds, a campaign initiated by Habitat for Humanity India in association with Jacqueline, to help the flood affected.

A few minutes later, she reaches the site wearing a white T-shirt and light blue jean, waving at people standing on both sides. An excited Jacqueline gladly poses for photos and selfies. As we sit down for a chat, she says, “I visited Kerala a few years ago on a short trip. I didn’t get to see much then. Since then, I have been looking forward to be here again.” It is because she can connect to Kerala. “Kerala reminds me a lot about my home, Sri Lanka,” she says. “Both the places share a lot of similarities in terms of food, cultural elements and landscape, especially, the lush green landscape and settlement.”

She feels content to be in Kerala for a noble cause. “I have been working with the Habitat for a long time. This is my fourth project with them. The first one was in Thailand, second in Sri Lanka and the third in Chennai,” she reveals. 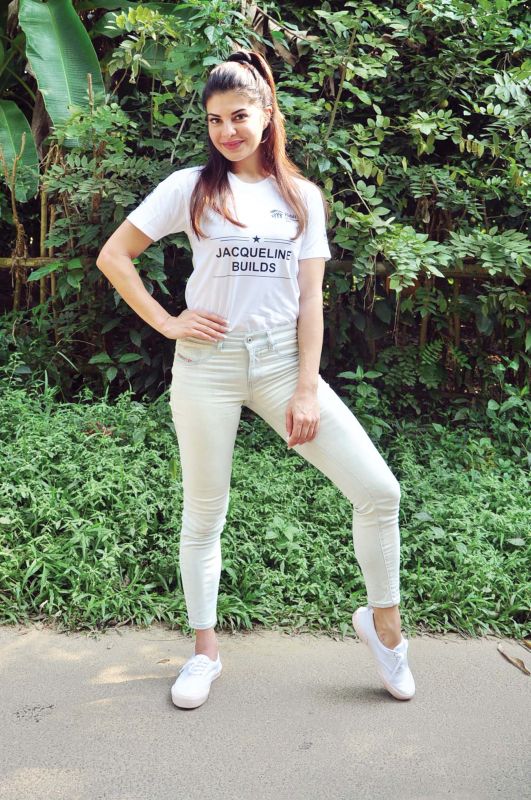 The Jacqueline Builds campaign began after the Tamil Nadu floods in 2015. As part of it, they build disaster-resilient homes that are equipped with six additional base pillars which can withstand impacts of natural disasters like earthquake. They build homes three feet above the ground level to prevent flood waters entering them. In Kerala, the team is planning to construct 500 such homes. One has already been completed and handed over to Rajeswari and Subramanian in Thrissur. In Aluva, a two-bedroom house is built for Anilkumar K.C. and Sreedevi S.

According to Jacqueline, even a small help matters in disastrous situations like the floods. “So many calamities happen across the globe. If there is some scope to generate kindness, do it. Habitat came to my mind when I heard about the situation in Kerala,” she adds. “It was heartbreaking to see the devastation here. I knew people had lost their homes and that I should help them rebuild them. I reached out to Habitat as I was sure that they would direct me to execute it,” says Jacqueline.  She also exhorted her celebrity friends like Akshay Kumar, Arjun Kapoor, Hrithik Roshan and John Abraham to contribute to the cause. “I built one home. Rest of them will be done through donations. I couldn’t have done all these without them,” she smiles.

The face of the campaign, she loves to be on the ground with volunteers. “We begin from the scratch. I am here to see the homes and meet the families. I would like to interact with them and gather their feedback. All these make me feel good,” says Jacqueline, who has been part of charity activities for a long time.
In 2011, on behalf of the People for the Ethical Treatment of Animals (PETA), she sent a letter to the Mumbai Municipal Commissioner asking to stop horse-drawn carriages in Mumbai. In 2013, she held an auction in London to raise funds for Pratham NGO, which helps children’s primary education.  In 2014, she was named ‘Woman of the Year’ by PETA for supporting protection of animals. In 2016, she addressed the European Parliament about the challenges in housing and human settlement in the world.

Jacqueline says she indulges in charity works as she knows that celebrity status comes with a responsibility. “We should give whatever we could within our capacity. I knew that the platform I have should be used for the goodness of people. I would feel terrible if I don’t do that,” she signs off.