Standing up against abuse

DECCAN CHRONICLE. | NAMRATA SRIVASTAVA
Published Sep 12, 2018, 12:00 am IST
Updated Sep 12, 2018, 12:10 am IST
When filmmaker Vivek Agnihotri posted a venomous tweet about Swara Bhaskar little did he expect that Twitter would literally shut him down.

Twitter has taken strict action against filmmaker Vivek Agnihotri for posting an abusive tweet against actress Swara Bhaskar, after she complained.

When filmmaker Vivek Agnihotri posted a venomous tweet about Swara Bhaskar, little did he expect that Twitter would literally shut him down. It all started when Swara Bhaskar expressed her solidarity for the Kerala nun, a rape victim, who was referred to as a “prostitute” by MLA PC George. (The nun has accused a Bishop of raping her multiple times.) Swara, who doesn’t shy away from raising her voice against injustice, tweeted about George’s comment, “Absolutely shameful and disgusting!!!! Scum present across political spectrums and religious divides in India. Literally nauseating (sic).” This is when Vivek decided to trivialise the #MeToo movement against sexual harassment by playing on the hashtag to deal a low blow to Swara on the microblogging site. “Where is the placard #MeToo-ProstituteNun? (sic)” Vivek tweeted. It is to be noted that a picture of Swara holding a placard, while protesting the rape of an eight-year-old Kashmiri girl, had gone viral earlier this year.

Never one to back down from a fight, Swara lashed out at the misogynist filmmaker. “Vivek. Just want to point out that you are using the trauma of women who are rape survivors to slut shame and abuse in public a woman you don’t like. In the rare moments of sanity that may visit your brain otherwise unhinged with hate think about how low that is. #scum (sic).” That’s not all, she flagged off the abusive post to Twitter authorities, who in turn, were swift to lock his account.

Tejaswini Madabhushi, who is part of the support group Hyderabad for Feminism, is no fan of Vivek’s. She says, “I have watched the movie Vivek Agnihotri made, Buddha in a Traffic Jam, and I have not seen a worse movie in my life. Every aspect of the film was so bad. So I think it’s wrong to consider him an ‘intelligent’ man. To post a nasty tweet referring to the protest against the rape of a Kashmiri girl, which was such a gruesome act, is just insensitive.”

Vivek, however, stands by his words. “It was to make a point that these liberals always make placards and run hashtags to defame an entire community when a Hindu is involved. Recently, they ran #MeToo UrbanNaxal when India’s enemies #UrbanNaxals were arrested.”

“I made a point. People understood,” he said, adding, “Such mischievous and hardcore people need strong doses. Problem is, all those people are in the media and they will gang up against me,” says Vivek, who claims to speak for the typical small town, middle class traditional Indian person. “I don’t care much about such privileged people. But the whole of Bollywood is baying for my blood,” he adds.

The belief that people are only defaming the “Hindu community” is not exclusive to Vivek alone. But Tejaswini says, “Women have been subjected to violence because of their religion for years now. The Kashmir rape case was one such instance. The eight-year-old was raped only because she belonged to a particular community. And that’s not the only example, a few years back a nun was raped in Orissa due to her religion. So, the religion aspect cannot be dismissed completely. However, every perpetrator, no matter which religion he belongs to, should be tried and punished.”

Resonating Tejaswini’s thoughts, senior vice-president of Rainmaker Legal Compliance and Miss Universe India 2011, Vasuki Sunkavalli says, “It’s appalling I don’t know what such people are thinking when they make such insensitive comments. Religion should have no place in the narrative of any crime of this nature.”

The legal side of things
Vasuki, who is a lawyer herself, with regard to the Swara incident, says, “It is outraging a woman’s modesty whether you do it by touching her inappropriately or abusing her in public. So a case can be built on the same.” However, Vasuki also points out that the battle could be long and tiring. “We need a system that speeds up the entire process. Currently, a legal battle could just go on and on. After all, how far are you going to go with filing a case, following up and for how long are you going to fight it?”

A. Venkateshwar Rao, Dy. Commissioner of Police, Cyberabad Commission-erate, however, assures that the police takes every step to ensure the perpetrator is brought to justice. “Women’s issues are looked into very carefully. Once a woman complains about something, we make sure we investigate it thoroughly and get it resolved quickly. A woman can approach Bharosa (an initiative by the Hyderabad Police to protect women and children) and She Teams to assist her at any time.” 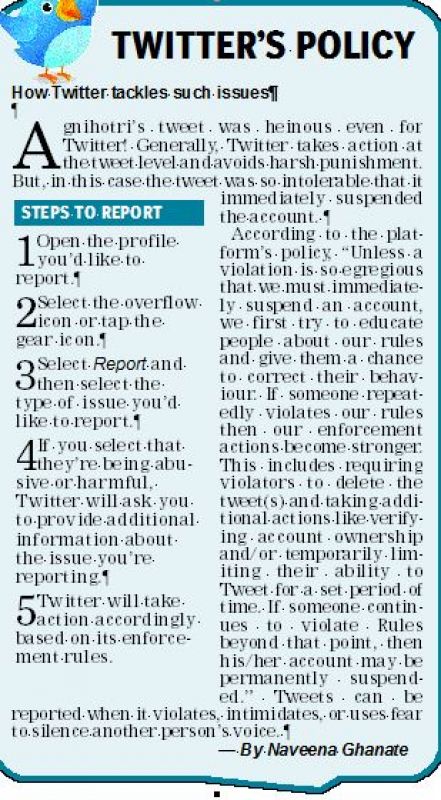