Athiya Shetty's post for Suniel Shetty that Drake commented on.

Mumbai:  Heard about the Kiki Challenge numerous celebrities from entertainment and others are currently doing? After a moving car, fans have gone so creative with the challenge that they are now lip-syncing and dancing to the song ‘In My Feelings’ in front of a moving train, prompting warnings from various police departments and governments across the country against its dangers.

But people who are not too familiar with international music might not be aware about the man behind the song, Canadian rapper Drake.

This challenge has taken not just India, but various parts of the world by storm.

So what happens when such a famous rapper comments on a picture shared by, (not global stars Priyanka Chopra or Deepika Padukone) but two-film old Athiya Shetty, daughter of Suniel Shetty.

Athiya shared a throwback photo of hers with her father on the occasion of his 57th birthday on Instagram and wrote, "Happy birthday Papa. Thank you for always being so patient with me, keeping the faith when I forget to and never letting go of my hand. I hope to make you proud every single day. I love you. With a heart like yours, you deserve all the happiness the world has to offer.”

‪Happy birthday Papa ♥️ Thank you for always being so patient with me, keeping the faith when I forget to and never letting go of my hand. I hope to make you proud every single day. I love you. With a heart like yours, you deserve all the happiness the world has to offer. ‬

And you won’t believe, Drake, whose handle name is champagnepapi, commented on the post and called Suniel a ‘legend.’ 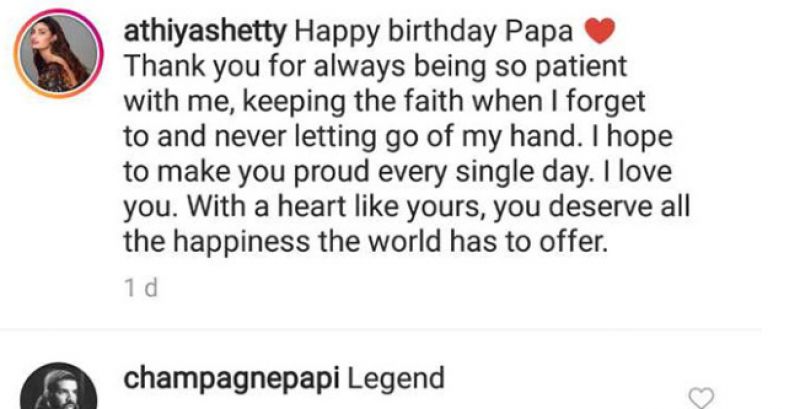 Fans were shocked about him not just about knowing Bollywood, but also knowing so much to call him a legend.

They wondered if he was smoking something Indian, drunk or that his account was hacked and even going to ask if Athiya was his ‘Kiki.’

It’s not the first time Drake has commented on Athiya’s Instagram handle; previously he posted several emoticons on her birthday picture, and also liked another photograph of hers.

The duo reportedly met at a party in London last year and hit it off from there, sparking dating rumours as well, which were reportedly denied by the actress’ team.

But could Athiya indeed be Drake’s Kiki?