As usual, the Eid before Mannat, the home of Bollywood’s King Khan, was ecstatic. A little earlier than expected, Shah Rukh Khan, with his cute miniature version Abram, appeared at the balcony, waved to his fans and showered flying kisses on them. The crowd greeted him back with screams and roars – exactly like the scene ripped off from his recent movie Fan.

And papa Khan reveals what prompted an early show. “I was tired as we had slept a little late. I was to meet the media so I thought I shall get up by brunch time. But AbRam, all excited hearing the yelling of fans, took a quick shower, dressed up and banged into my room saying, “Papa get up. Bachaas have come!”

Festivals have always excited him. “Festivals are family time. As Indians, we get to celebrate a lot many festivals and as years pass, festivals bring more people together. And it’s a holiday,” he laughs.

Turning nostalgic, he adds, “I lost my parents at an early age. On Eid, my grandmother would give me Rs 11. We would dress up in white clothes, relish good food and have fun with friends and family.” 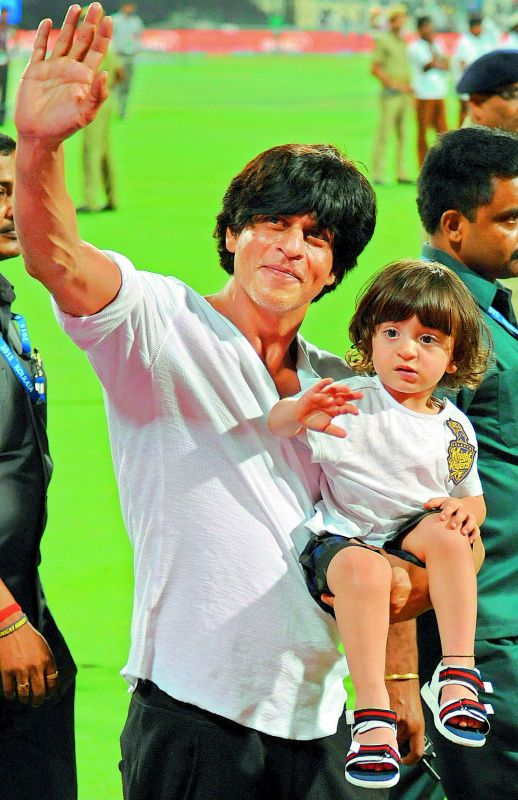 Known to be a family man, SRK is all proud of his three darlings Aryan, Suhana and AbRam. “Like any parent, I love all kids equally. All my three children are special to me. I have a cool dude, a pretty lady and a little gangster. I am very lucky,” he said.

So, how is life after Abram? Pat comes the reply. “I have more toys to play after AbRam came into my life. I have an excuse to buy more cycles, cars, stuffed animals and play with it,” he says.

Aryan already has his share of fans. Is it time for him to make the big move? SRK replies, “I want my kids to educate themselves first. I don’t know if Aryan wants to be an actor, but for the moment, he is following my footsteps by being educated. On following my footsteps as an actor, it is up to him. We will be happy with whatever his decision is.”

On his relationship with the other Khans – Aamir and Salman – he says, “We respect each other a lot; that is why we are here. We have stood by each other for almost 25 years now; there is nothing left but respect for each other. We are all destiny’s children; it is not that we are special. We have worked hard for it and it has paid off. I wish there will be more children who can excel in every manner and enjoy life. However, they should at least finish their graduation. Education helps all to be able to take the right decision,” he signs off.