KOTTAYAM: The Kottayam  diocese bishop of the Jacobite Church, Thomas Mar Themothios, has criticised  the committee of the St John’s Jacobite Syrian Church, Attamangalam,  near Kumarakom, which refused to bury the body of Madhu Jyotsna Akhauri,  maternal grandmother of Bollywood actor Priyanka Chopra.   The  decision was   “inhuman and anti-Christian,”  the bishop said  after Ms Chopra expressed her protest and called the decision   “unfortunate.”

“Ms Akhauri  was admired for her creative work  in  society. It is a sacred act as per the tradition of the church to bury the dead. The decision of the church authorities is against justice,”  Mar Themothios said. Ms Madhu Jyotsana Akhauri  had  expressed her wish in her will to be buried in the cemetery of her home parish where  her parents,  the late K.J. John and Eliyamma of Thavalapara, Elayidathusserry family, are laid to rest.

But the church committee denied the permission on the ground that she was no longer a member of the parish.   Ms Akhauri was later buried at the cemetery of the St Thomas Jacobite Church, Ponkunnam,  on Sunday on the intervention of  bishop Thomas Mar Themothios.

The St John’s  church authorities said that it was the decision of the church committee  not to conduct the burial of Ms Akhouri, who was not a member of the parish for many years. “We cannot violate the rules. If she had such a wish to be buried at the church cemetery, she could have formally given an application before the committee earlier,” Father Simon Manuel, vicar,  told DC.

Babu Philip, a distant relative of Ms Akhora,  said that the decision of the church was unanimous. Ms Akhouri, who was previously Mary John, the second among the four daughters of the late K.J. John and Eliyamma, had gone to Bihar after completing her nursing studies. While working as a nurse in Bihar, she married  Dr M.K. Akhouri, a Member of the Legislative Council (MLC) in Bihar.

After marrying Mr Akhouri, she used to come to her home place at Kumarakom only once in a while.   Priyanka’s mother Dr Madhu Chopra is the daughter of Dr M.K. Akhouri and Madhu Jyostna Akhouri. Ms Akhouri, 94, a social activist and a former MLA,  breathed her last in Mumbai on June 3.

Her mortal remains were brought to Kumarakom on  June 5, Sunday,  as per her will which said that she should be buried in the cemetery of the St John’s  church  where she was baptized and her parents were laid to  rest.  Priyanka attended  the funeral of her grandmother, whom she affectionately calls  ‘Nani,’  with her mother  and brother Sidharth. The St John’s  church has more than 630 families as  parish members.

The decision taken by the synod to take over the administration of the Kottayam diocese of the Jacobite Syrian Church by   Catholicose Baselios Thomas I has been stayed as per the constitution of the Jacobite  Church by Patriarch of Antioch Ignatius Aprem II. The Patriarch’s decision was in the context of the synod decision on Thursday to stop  Bishop Thomas Mar Themothios  from exercising his authority as the bishop of the diocese.  The  majority of the metropolitans were not present for the synod. 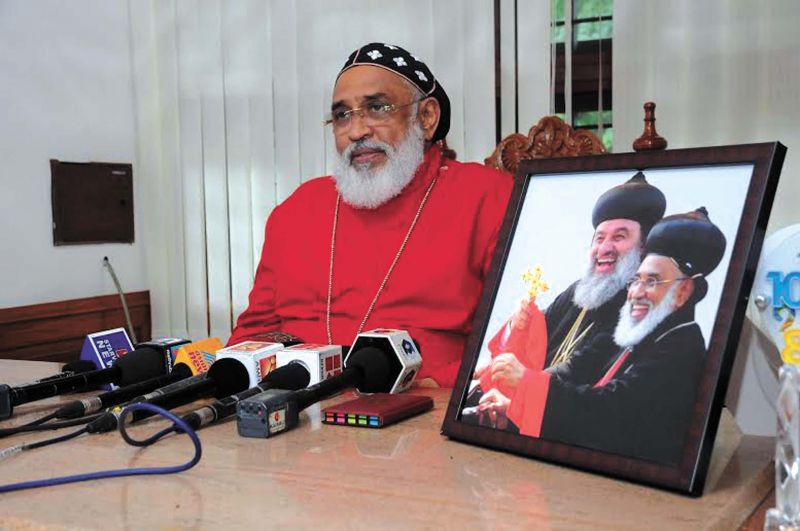 The Patriarch also entrusted a five-member committee to inquire into the allegations. “The synod decision was based on false news propagated and false reports submitted to  Baselios Thomas I, which made it  remove the Metropolitan of Kottayam diocese,” said sources from the diocese.

“The removal was not based on the assets of the Kottayam diocese, but on  the differences of opinion between some priests and laymen,”  said sources. The meeting of the  representatives of the priests and laity  from 43 churches held at St.Joseph’s cathedral here on Friday  approved the decision taken by the  Patriarch.

Bishop Thomas Mar Themothios welcomed the decision saying that the synod action  was against the rules of the Church. When  two-thirds majority is needed for taking such a decision, Mar Themotheos alleged that it was taken without that majority. He added that the synod took the action due to the complaint given by some priests  against a layman, he added.