'Toofan in the making': Farhan Akhtar shares his prep picture

Mumbai: Multi-talented Farhan Akhtar who is currently gearing up for his upcoming film Toofan, shared a picture post the workout regime along with his trainer.

The actor is undergoing rigorous training and isn't skipping any session as the role demands a certain kind of physique. Farhan will be essaying the character of a boxer in Toofan for which he is leaving no stone unturned to get in the skin of it.

Farhan has been treating his fans with a sneak peeks into his workout routine and now he has shared a picture with his trainer captioning, "#ToofanInTheMaking co-inspirator @drewnealpt". 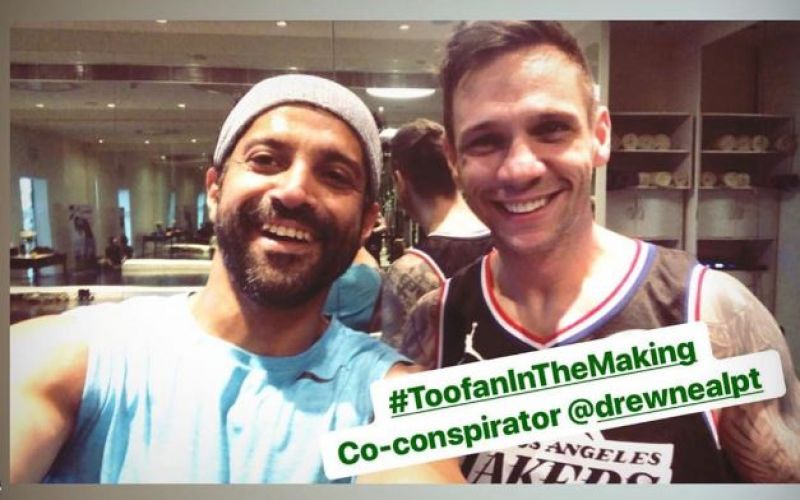 Farhan's debut album Echoes will be globally launched on the 12th of April.

After 2013, 6 years later, the hit combination of Farhan Akhtar and Rakeysh Omprakash Mehra are all set to reunite on screen for a film based on boxing titled Toofan, an Excel Entertainment production in association with ROMP Pictures.

After playing Olympian sprinter Milkha Singh, Farhan is all set to play the role of a boxer in another sports-drama film titled Toofan.

On the work front, Farhan Akhtar is currently basking in the glory of his recent production Gully Boy and web series Made In Heaven and is also gearing up for his upcoming 'The Sky Is Pink' where the actor will be starring alongside Priyanka Chopra after Dil Dhadakne and Toofan.

■Important for me to share my honest feelings and thoughts: Farhan Akhtar on 'Echoes'
■Farhan Akhtar-Shibani Dandekar's unseen holiday pictures set the beach on fire
■Farhan Akhtar goes an extra mile to achieve the desired look for 'Toofan'
■Farhan Akhtar shoots for last leg of 'The Sky Is Pink' before kickstarting 'Toofan'