Mumbai: Anushka Sharma looked beautiful in the recently released song ‘Channa Mereya’ from her upcoming film ‘Ae Dil Hai Mushkil’, but she had also spoken about how difficult it was for her to carry that heavy outfit during the shoot. The actress will also be seen in the comparatively lighter outfit, saree, in the film.

A picture of her in yellow chiffon saree with Ranbir Kapoor trying to woo her with the greenery in the background was shared by the makers some time ago. And the actress will also be seen in a stunning red saree in the film with the sequence getting shot on the snowy mountains.

Anushka recently shared a picture on Instagram of her wearing a red saree and fashion designer Manish Malhotra pulling her pallu and creating a romantic moment on the snowy mountains. 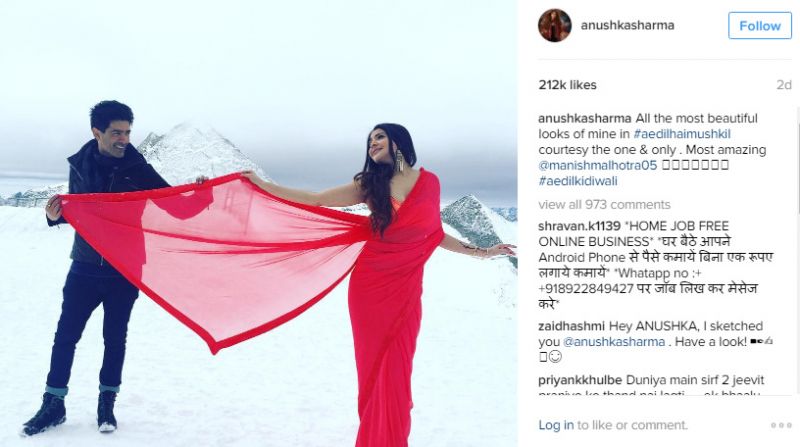 The particular sequence seems to be for a song and we are waiting to see how her chemistry with Ranbir would look like in the song.

■SRK and Anushka busy themselves with 'The Ring' shoot in Budapest
■Anushka Sharma could barely walk while shooting for ‘Channa Mereya’
■Snapped: Shah Rukh Khan and Anushka's balcony romance for 'The Ring' goes viral
■Watch: SRK-Anushka cheer on as Lisbon dancers perform live on sets of The Ring
■Anushka Sharma to star in Ranbir Kapoor's Sanjay Dutt biopic