Dwayne rescues Priyanka, assures fans they'll not ‘blink and miss’ her in Baywatch!

Priyanka Chopra plays the role of antagonist named Victoria Leeds in the film.

Mumbai: After all the hype and hoopla surrounding Priyanka Chopra's grand turn as the villain of the 'Baywatch' film, the first official trailer finally surfaced on the internet and boy, was it disappointing.

The very hyped trailer of Priyanka’s silver screen Hollywood debut proved to be a massive downer for her fans. The film, that stars Dwayne Johnson and Zac Efron, has been in the news for having Priyanka in the cast as their main antagonist, after her massive success as Alex Parrish in the hit Hollywood TV drama, 'Quantico'.

But the first official trailer of the film, slated for a May 26, 2017 release, concentrates primarily on its three protagonists, Dwayne Johnson, Zac Efon and Alexandra Daddario. As Priyanka makes a disappointingly short 2-second long blink-and-miss appearance in the trailer, her friends in India criticised her on social media.

To her rescue came her co-star Dwayne Johnson, who assured Indian audiences that there’s more to Priyanka Chopra’s character in the film and all one has to do is wait a little longer and have faith.

“All our fans & press friends in INDIA, @priyankachopra SLAYS our #Baywatch! Trust my plan..The #Boss is comin',” Dwayne wrote.

Priyanka Chopra thanked Dwayne for standing up for her by writing, “lol...thank you DJ...trusted you from day one. India loves you and will love everything about Baywatch! #Wait4VictoriaLeeds @TheRock.”

To which, Dwayne told fans that there’s a big plan waiting for them. “I luv India back! (U already know I luv U;). It's aaaallll in the big picture plan. #Wait4VictoriaLeeds #Boss #Baywatch MEMORIAL DAY,” he tweeted. 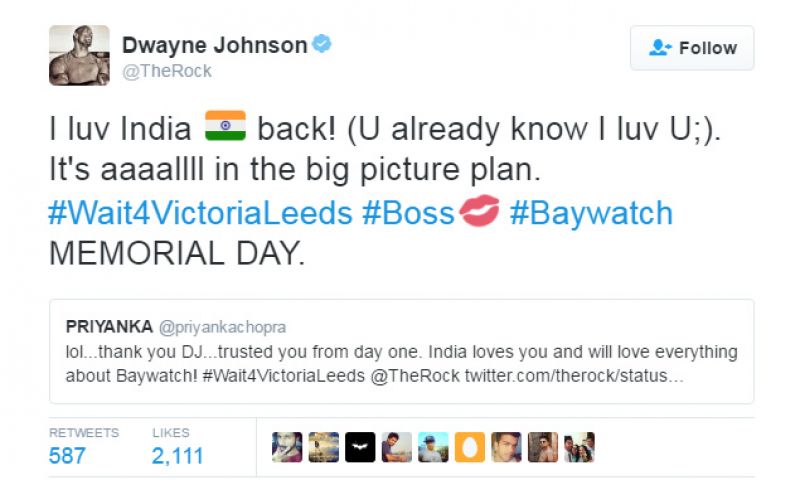