Shah Rukh visibly can barely contain the cuteness overload that his son is. (Pic: @srk_russian_fc)

Mumbai:  Shah Rukh Khan might be in the news for his delightful shenanigans in the first episode of Koffee With Karan, but one picture of his munchkin AbRam and he will no longer be the cynosure of everyone's eyes.

The actor, who's been gracious enough to share the occasional picture of his youngest, often can be seen enjoying every bit of his son's company.

The actor, who'd shot for his Rahul Dholakia directed 'Raees,' also starring Mahira Khan and Nawazuddin Siddiqui, took his son along during his most recent trip.

The two then planted a sapling, an act which was attributed to AbRam by the authorities in the most adorable way possible. 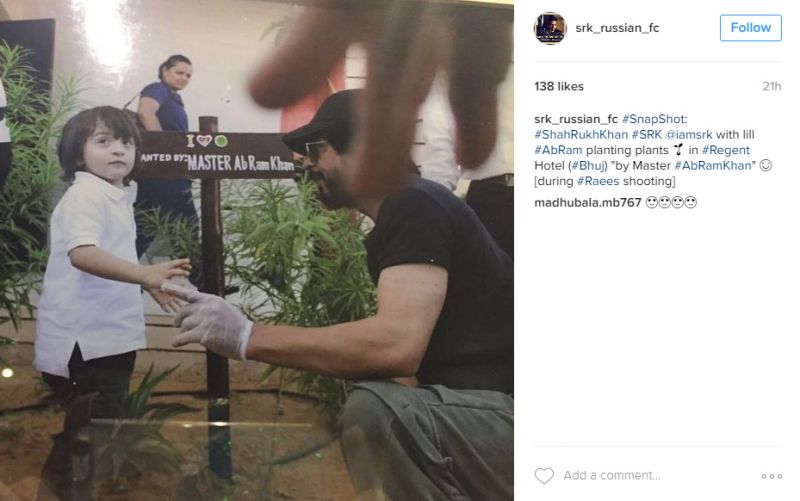 SRK himself seems to be barely able to contain the cuteness overload that his much adored son was being, at that moment.

Shah Rukh, who'll next be seen alongside Alia bhatt in Gauri Shinde's 'Dear Zindagi,' has currently been working on Imtiaz Ali's 'The Ring'.

Video: Shraddha's 'Baaghi 3' co-star Tiger grooves to the tunes of her latest film!

Ananya Panday gleaming with joy on the sets of 'Khaali Peeli', see photo