KRK had also been involved in a feud with Ajay Devgn.

Mumbai:  Kamaal R Khan is no novel entity to courting controversy and he's at it again!

The self-styled film critic has been ruffling a feather too many and his latest target is none other than South Supremo Rajinikanth.

The 'Deshdrohi' actor in a series of tweets talked about how a good physique and acting mettle don't ensure someone a superstar status, adding the decisive factors are attitude and aura. 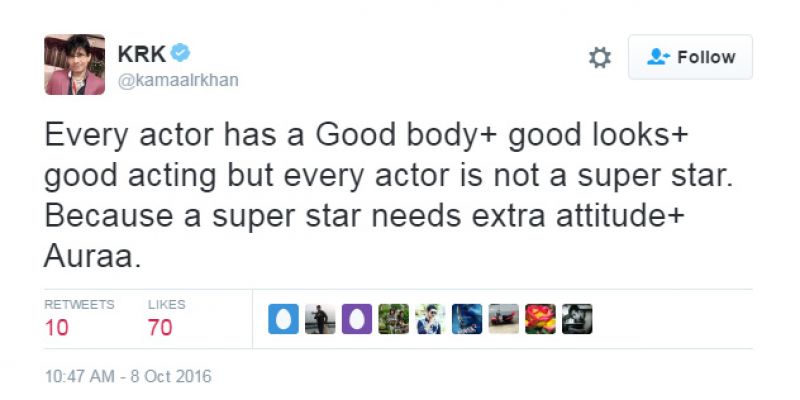 He pushed it a bit farther asserting if that were to be, every gym instructor and bodyguard would be a superstar in the country.

Not one to stop at that, Kamaal took potshots at Rajini's physicality and said he wouldn't be the superstar he is today, if a good physique and good looks were to be the only criteria.

The tweets immediately went viral and fans of the extremely humble and down to earth 'Robot' star took major umbrage.

Previously, KRK had also been in the news when Ajay Devgn had shared an audio clip of his telephonic conversation with Kumar Mangat, where the former could be heard admitting to have accepted money from Karan Johar to promote his upcoming directorial 'Ae Dil Hai Mushkil,' whilst slandering Ajay's 'Shivaay,' which is set for a Diwali clash with Karan's Ranbir Kapoor starrer at the box-office.

Though, KRK claimed it was to get himself rid of a Kumar Mangat, the controversy had escalated nastily.

It remains to be seen how Rajini might choose to respond to the jibe.