Karachi: Actress Mahira Khan has broken her silence over the ongoing controversy surrounding the demand for a ban on Pakistani artistes in Bollywood after the Uri attack, saying she strongly condemns any act of terror and prays for a peaceful world.

In a Facebook post, Mahira wrote, "In the 5 years that I have been working as an actor I believe that I have tried my best to keep my country's respect intact - by being a professional and by representing Pakistan here and elsewhere to the best of my abilities.

"As a Pakistani and citizen of the world, I strongly condemn any act of terror, any loss of human life no matter which soil it is on! I will not rejoice in bloodshed and war.

I will always hope for and dream of a world where my child can live without it, and always plead with everyone to imagine a peaceful world," she wrote. 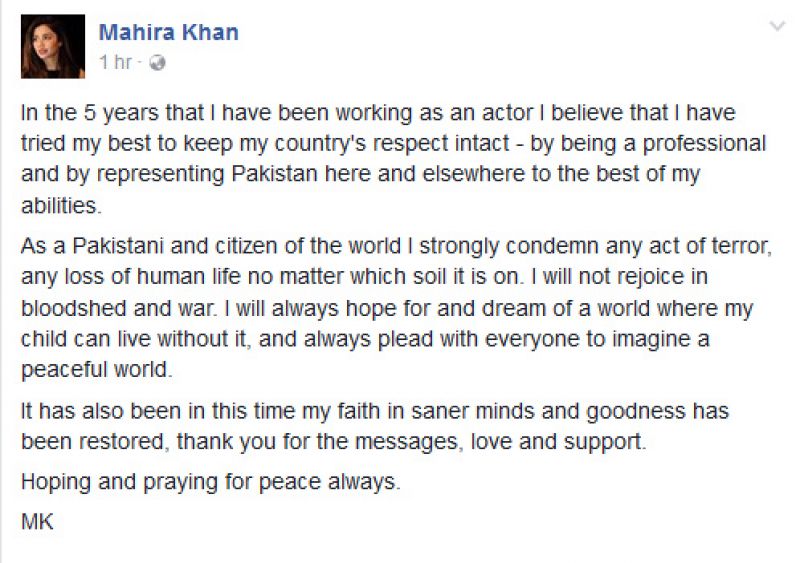 There is a growing demand for a ban on artistes from Pakistan by certain sections in India in the wake of the Uri terror attack.

Fawad, Mahira and other Pakistani actors were targetted by Maharashtra Navnirman Sena (MNS), which had issued an ultimatum to them to leave India within 48 hours or be forced out.

The party has also threatened to stall the releases of 'Ae Dil Hai Mushkil', which has a cameo by Fawad, and 'Raees', starring Mahira in the lead role.

Subsequently, the Indian Motion Picture Producers Association (IMPPA) passed a motion to ban artistes from across the border from working in the industry till Indo-Pak relations are normalised.

Bollywood is divided on the issue. While Salman Khan, Karan Johar, Hansal Mehta and Anurag Kashyap have criticised it, many in the industry such as Ajay Devgn, Randeep Hooda,

Sonali Bendre and Nana Patekar have supported the ban on artistes from Pakistan. Many sections had also criticised Pakistani artistes' silence over the attack.

Ranveer shoots with Mahesh in Mumbai