There were huge speculations about Sonam Kapoor’s marriage, but unlike unsurity over Anushka Sharma’s marriage in December, Sonam herself announced that she would get married to Anand Ahuja.

And she did finally tie the knot with the entrepreneur today morning, amongst family and industry friends like Aamir Khan, Amitabh Bachchan, Kareena Kapoor Khan, Karan Johar, Rani Mukerji, Ranveer Singh and others.

The fashionista, known for her stunning dressing sense, was a delight to watch at her Mehendi ceremony on Sunday, followed by her Sangeet on Monday and wedding today morning too.

She has now come out as Mrs. Sonam Kapoor Ahuja, posing with her newly-married husband Anand Ahuja.

Anand Ahuja, on the other hand, looked cool as he opted for the classic black and white sherwani suit.

Both of them however try hard to break the norm – Sonam did so by not acknowledging her marriage by wearing either sindoor or mangalsutra or chooda, and Anand either tried to experiment way too much or ended up disrespecting Indian culture by opting for sports shoes to go with his Indian attire.

Sonam’s red lipstick and minimalistic jewellery is a saving grace for the actress to some extent. 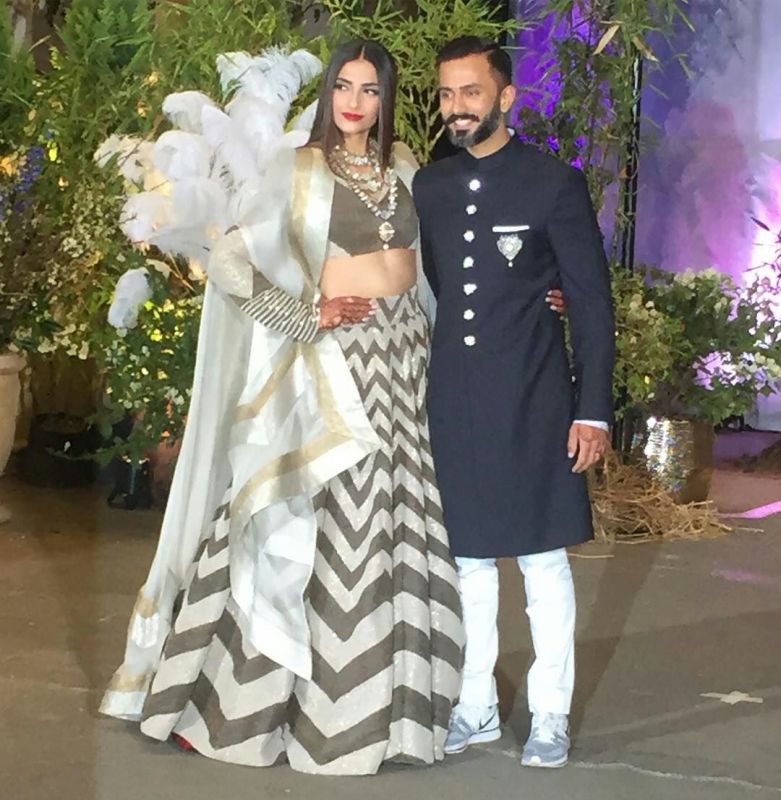 Imran Khan, Sanjay Kapoor with his son, Shatrughan, Poonam, Luv Sinha, Satish Kaushik with his wife, Anil Kapoor, Shanaya Kapoor, Kangana Ranaut, Jackie Shroff, Boney Kapoor and Amar Singh are some of the names who have already reached the venue.

They will be accompanied by the amazing looking Kareena Kapoor Khan, Swara Bhasker, Harshvardhan Kapoor and others.