Jacqueline will be seen performing a few high octane action sequences in 'Dishoom'.

Bollywood actress Jacqueline Fernandez loves to keep herself fit and promotes a healthy lifestyle for others as well. The actress revealed that she loved to play a lot of sports during her school days which helped her to keep fit.

However, when asked as to which sportsperson she admires the most, Jacqueline picked the world's fastest sprinter Usain Bolt.

At a promotional event, the 'Kick' star said that she would love to train with Bolt because such personalities are very inspiring.

"Definitely, I would like to train with him. I would love to workout with him because I know what goes into training for track. It's really intense. But I think when you surround yourself with people, like you know who are so dedicated; you get really inspired and motivated. So, I would really like to know how it would feel like to get trained with him," she said. 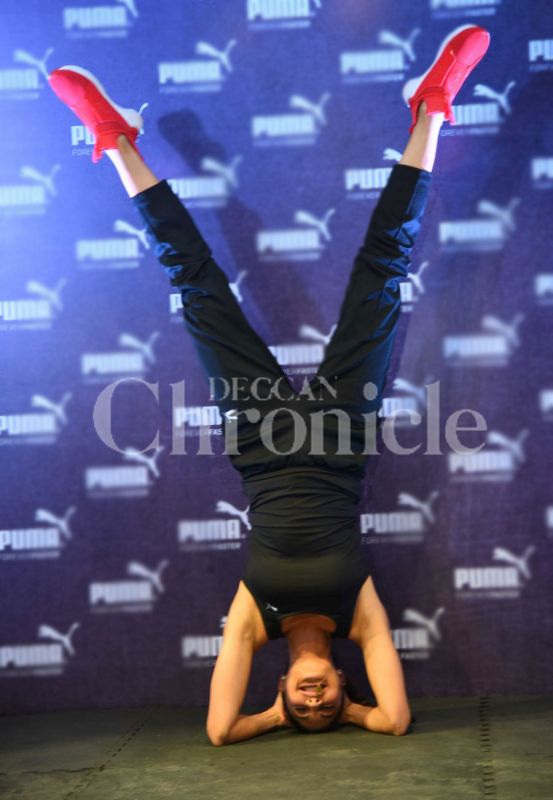 Jacqueline Fernandez performs a headstand at the event.

The 30-year-old Sri Lankan beauty, who is the brand ambassador for a sports brand, was present at the flagship store launch in the national capital where she also showed off her flexibility.

Jacqueline will also be seen performing a few action sequences with Varun Dhawan and John Abraham in Rohit Dhawan's directorial 'Dishoom'. The star is also excited that she will pack some punches in her upcoming film.

"My character in Dishoom is of someone, who is a bit of a rebel but very sporty and active. She is somebody, who knows her jumps, stunts and stuff like that. So, you will see me being involved in a little bit of action and even high octane action with Varun and John," Jacqueline said at the event.