Ranveer and Alia all set to work together in a movie project.

Mumbai: We all loved Ranveer Singh and Alia Bhatt’s chemistry in a series of television commercials for an online travel portal. According to a daily, the funky and peppy stars will be working together in a full fledged movie. 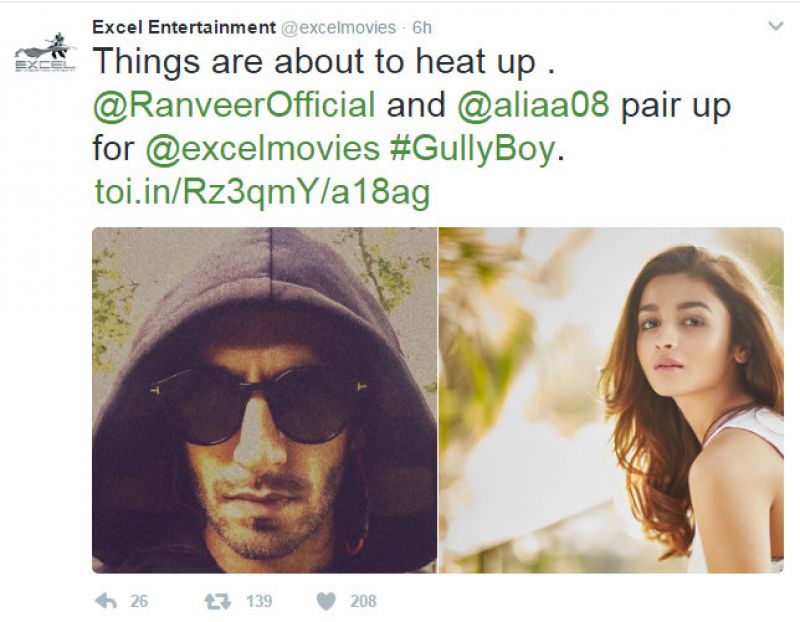 Ranveer Singh and Alia Bhatt have been finalized to play the leads in the Zoya Akhtar's next movie, 'Gully Boy'. The shooting of the movie will go on the floors in November and will be co-produced by Farhan Akhtar and Ritesh Sidhwani's Excel Entertainment and Zoya's recently-launched banner Tiger Baby.

Isn’t that an exciting piece of news?

Alia will be next seen in 'Badrinath ki Dulhania' alongside Varun Dhawan while Ranveer will be seen in another epic film, 'Padmavati' alongside Deepika Padukone and Shahid Kapoor.

■Sara Ali Khan-Ranveer snapped together; will she debut opposite him in Gully Boy?
■Alia Bhatt talks about her favourite sex position and more secrets
■Padmavati lead men, Ranveer Singh and Shahid Kapoor, react to SLB attack