Parineeti, on Monday, joined her cousin Priyanka Chopra for her bachelorette party and took to her official Instagram account to share some glamorous pictures from the fun night.

In the latest picture posted by the 'Namaste England' actor, the two sisters can be seen sharing a candid moment full of laughter. While the picture has got about 288,190 likes till now, the most eye-catching comment was from groom-to-be Nick Jonas.

Completely smitten in love, the ' Find You' singer commented on Parineeti's post writing, "Wow she's so beautiful. Any chance you could introduce me?"

Pulling a witty reply out of her pocket, Parineeti wrote, "Nick Jonas, she's very hard to get! But I can try for you if you agree to pay the 5 million dollar shoe hiding fee!" 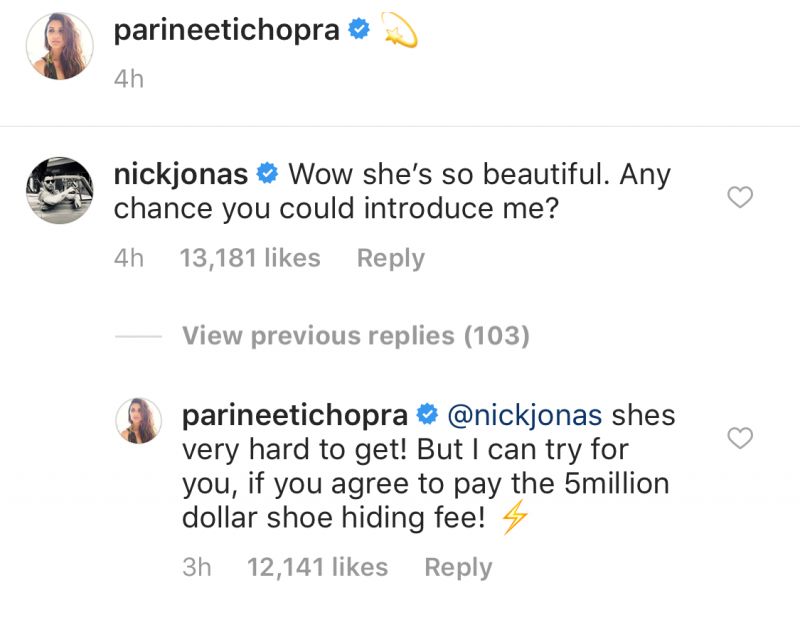 Priyanka Chopra, who recently took the internet by storm with pictures from her fancy bridal shower, celebrated her bachelorette party with her girl gang yesterday.

She was joined by her cousin Parineeti Chopra and her future sister-in-law and 'Game of Thrones' actor Sophie Turner.

While the pretty bride-to-be was busy enjoying her bachelorette, Parineeti made sure that the fans don't miss the fun, by loading her Instargarm page with somedrool-worthy pictures from her Mimi didi's special night.