'Ae Dil Hai Mushkil' is releasing this Diwali while 'Raees' is slated to release early next year.

Mumbai: Amid the crumbling ties between India and Pakistan in the wake of the terrorist attacks in Jammu and Kashmir’s Uri, several political parties had stated that they wouldn’t allow the release of films with Pakistani actors.The Indian Motion Picture Producers Association had also banned Pakistani artistes from working in the country till normalcy in the ties returns.

However, the association is trying to help films such as ‘Ae Dil Hai Mushkil’ and ‘Raees’, which have Pakistani actors like Fawad Khan and Mahira Khan respectively, release. IMPPA recently held a meeting with one of the protesting political parties, Maharashtra Navnirman Sena, in order to allow the release of completed films with Pakistani actors.They have also tried to arrange for a meeting with Shiv Sena chief Uddhav Thackeray for the same reason.

One of the members of the association, Ashoke Pandit took to Twitter to reveal the details. 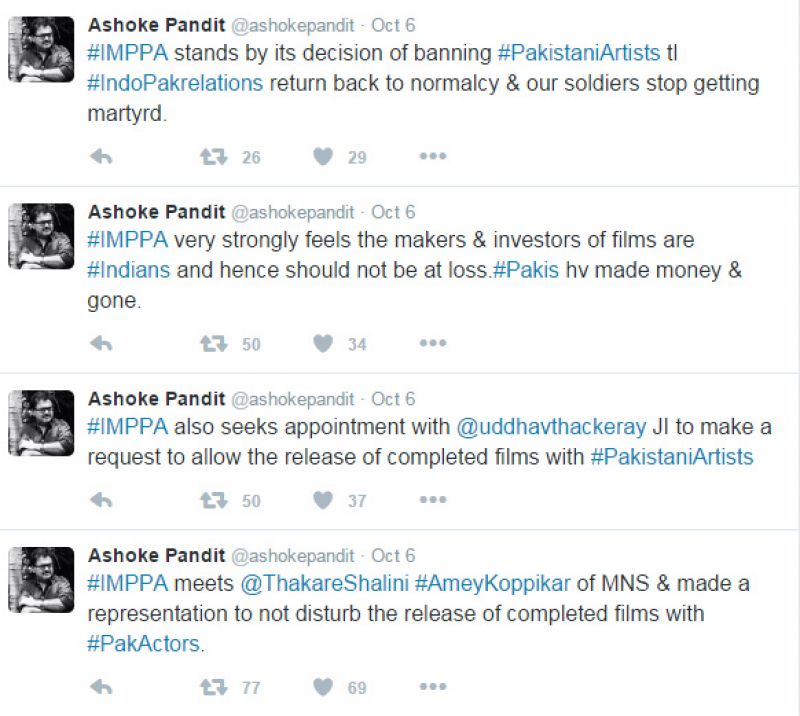 However, the party’s stand remains the same. MNS Vice-President Shalini Thackeray said that it is no longer “a party issue, but a national sentiment and our stand is unchanged in view of the public angst”. She was reported as saying, “The Indian producers have earned enough from the Indian audiences… It's time now that they respect national and public sentiments. Our stand on the matter remains the same."

It would be interesting to see what would eventually be the fate of these films.