Confirmed! Aamir Khan and Amitabh Bachchan to star in Thugs of Hindostan

Mumbai: After a lot of speculation, it has finally been confirmed that Aamir Khan will be sharing screen space with Amitabh Bachchan in Yash Raj Film’s upcoming project.

The film will be helmed by ‘Dhoom 3’ director Vijay Krishna Acharya. The film will be called ‘Thugs of Hindostan’ and will go on floors early next year. The makers have locked Dilwale 2018 for their film’s release.

The elated actor, Aamir shared the good news on his official Twitter account. “Finally, the moment I’ve been waiting for has come… to work with my icon, Mr. Bachchan! Thanks Adi, Victor, for ‘Thugs of Hindostan’. I’m too thrilled to be working with the actor I have admired all of my life. Shoot starts early next year, and the release has been locked for Diwali 2018. Can’t wait to get started! Fingers crossed,” Aamir Khan tweeted. 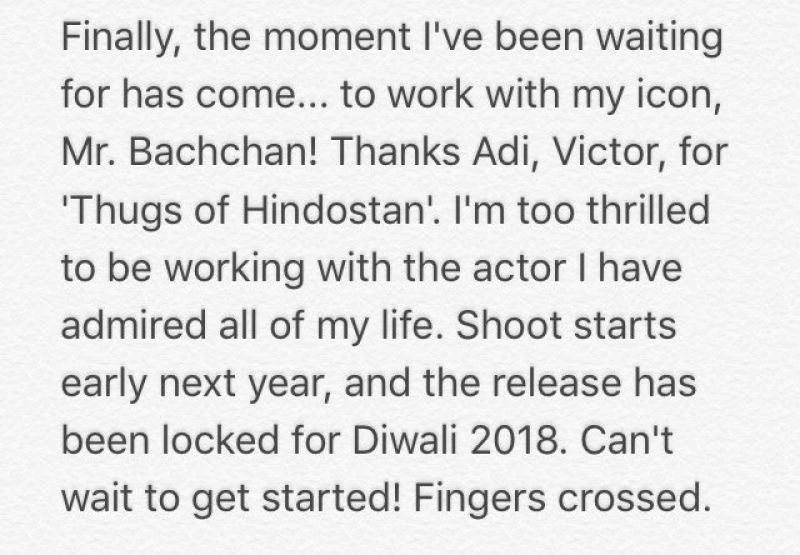 Aamir Khan tweeted the picture on his official account.

Just few days back, Amitabh Bachchan had also confirmed the reports while talking to an entertainment portal. Amitabh had said, “It’s a great honour and privilege to be working with Aamir and to be working with Yash Raj again and also to work with Victor, I just look forward to that moment.”

Earlier it was reported that the film was offered to Hrithik Roshan but the actor opted out of it and soon, Aamir Khan hopped on board. Fans are extremely excited to see Aamir sharing screen space with Big B.

With two superstars sharing frame in ‘Thugs of Hindostan’ which is based on the novel ‘Confession of a Thug’, one can fairly assume that a master piece is in the making.