Mumbai: Shahid Kapoor and his wife Mira were blessed with a baby girl Misha in August last year and fans of the couple are still waiting to see a proper glimpse of the baby. We often see the couple at the airport holding her in their arms, but she is always well-protected from the paparazzi then.

Shahid had also taken to Instagram to share a picture of her feet, which was officially her first glimpse. The actor has now given us the best glimpse of her till now in an Instagram picture where we see the father-daughter enjoy the sunset with the beautiful sea in the background. It is an adorable sight to see Misha grow up so fast and it’s endearing to see her curiously looking into her daddy’s phone as he holds her for a selfie. 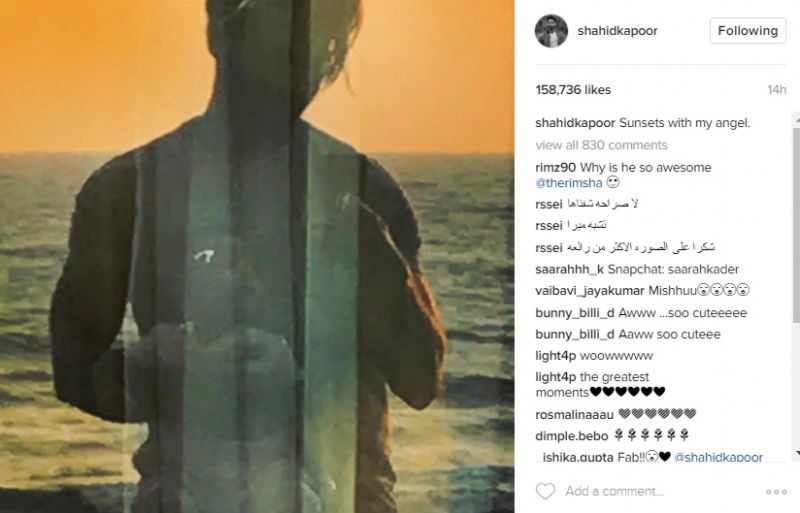 Fans would be pleased to see Misha in this picture but still be eagerly looking forward to see the baby even more clearly.

Shahid and Mira were their candid best recently at their first appearance on a television show, on ‘Koffee with Karan’ few weeks ago.

Shahid's film ‘Rangoon’ is set for a release on February 24.

■Shahid-Mira head to Amritsar with their baby girl to seek blessings from their Guru?
■Alia, Anushka, other stars are ecstatic about the new arrival in Shahid-Mira’s life
■Shahid-Mira, Sonam, Kangana, Alia and others at Masaba-Madhu's wedding reception
■Newly weds Shahid-Mira celebrate first Karwa Chauth
■Here's what happened when Shahid-Mira bumped into Saifeena at the gym