Mumbai: It is no hidden fact that Boney Kapoor’s family with Mona Kapoor and one with Sridevi never shared the best of equations.

However, the legendary actress’ untimely death seems to have thawed the relationship between the two families.

Arjun Kapoor cancelled the shoot of his film ‘Namastey England’ when he heard about the tragic news and was a pillar of strength for his father right from Dubai till the last rites in Mumbai.

His sister Anshula was also spotted at Anil Kapoor’s residence where Sridevi’s daughters Janhvi and Khushi were staying and were being consoled by Bollywood celebrities.

Boney, in his touching tribute to his wife from her Twitter handle, had spoken about Arjun and Anshula being ‘pillars of strength’ for himself, Janhvi and Khushi during the trying time.

On Sunday, Anshula gave an example of that by blasting a troll who made abusive comments on her half-sisters.

Anshula was furious when an Instagram user abused Janhvi and Khushi and she not only deleted her message, but gave her a fitting reply, saying she didn’t appreciate the comments on her sisters.

Strong willed, they dare to blossom & hold their own, spreading their beauty wherever the wind takes them. Wildflowers dare greatly 💕 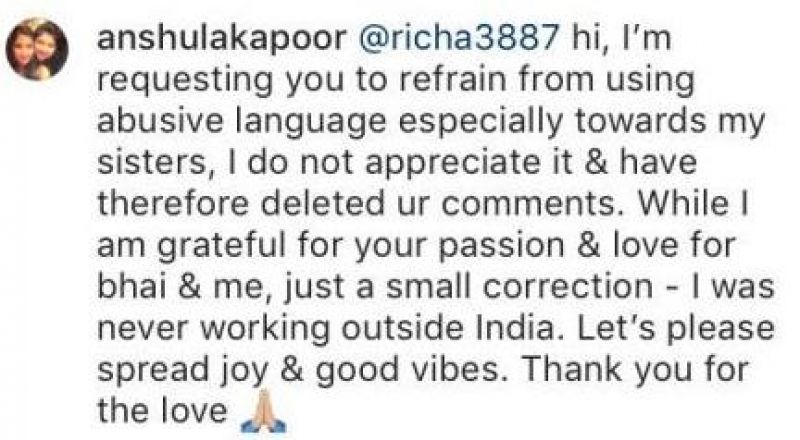 Janhvi didn’t directly respond to the post, but made a simple activity on her Instagram profile, which didn’t go unnoticed.

She started following Anshula on the social media platform.

The much publicised patch-up between Kajol and Karan Johar was also first spotted in a similar way and it’s heartening to know that all is well between the two families now.

■Throwback Thursday: Arjun shares pic with sister Anshula, calls her his 'little lamb'
■Boney Kapoor flies to Chennai to immerse Sridevi's ashes in Rameswaram tomorrow
■Boney Kapoor posts heartfelt tribute to Sridevi, from her Twitter handle and not his
■Happy Birthday Janhvi: Her message for Sridevi makes us feel she was her ‘Dhadak’
■RIP Sridevi: KJo takes charge of Janhvi, shelves Shiddat which legend was to star in