Inappropriate or adorable? Celebs react on Aishwarya and Aamir being trolled for pics

DECCAN CHRONICLE. | CHERYLANN MOLLAN
Published Jun 5, 2018, 12:00 am IST
Updated Jun 5, 2018, 1:00 pm IST
Celebrity parents have been trolled for posting ‘inappropriate’ photographs with their children. Who needs to change, them or us?

Photograph shared by Aamir Khan on Facebook, where he can be seen with his daughter Ira. Aishwarya Rai Bachchan with Aaradhya.

It is said that parental love is unconditional; but, many social media users, especially those with a penchant for trolling, seem to think that certain conditions must be applied, like no lip kisses, or no father-daughter bonding sessions on the grass. Recently, Aamir Khan found himself at the receiving end of troll-ire when he posted a picture of him sharing a cute moment with daughter Ira. The photograph was labeled ‘unacceptable’ and ‘inappropriate’ with some Facebook users even ascribing sexual overtones to the image. Former Miss World, Aishwarya Rai Bachchan too ruffled feathers when she posted a photograph on Instagram that showed her kissing daughter Aaradhya on the lips. Abroad, Victoria Beckham was criticised for posting a similar picture with daughter Harper. While these photographs convey nothing more than a parent’s affection for his or her child, we wonder why the extreme reactions.

Model, actress, and mother of two, Aditi Govitrikar, believes it's because our society is not comfortable with physical expressions of love. “There are different levels of expressing love. In India, we are not very comfortable with the physical expression of love. That’s probably why this kind of trolling happens,” she says. But the actress feels it is not inappropriate for a parent to engage in physical displays of love. “A child can sense a good touch and a bad touch. In such cases, where a father or mother expresses his or her love, the child will be able to feel the love. I don’t think there’s anything wrong in expressing physical love towards your child, as long your child is not uncomfortable,” says Aditi.

Social scientist and author Kamla Bhasin is of the opinion that physical expressions of love are important. “It’s absurd that people have a problem with it, especially between a parent and child. I personally believe that we can’t survive without special moments, like kissing, hugging or sharing a joke with your father. As a society, we have to come to terms with things like this,” says Kamla. 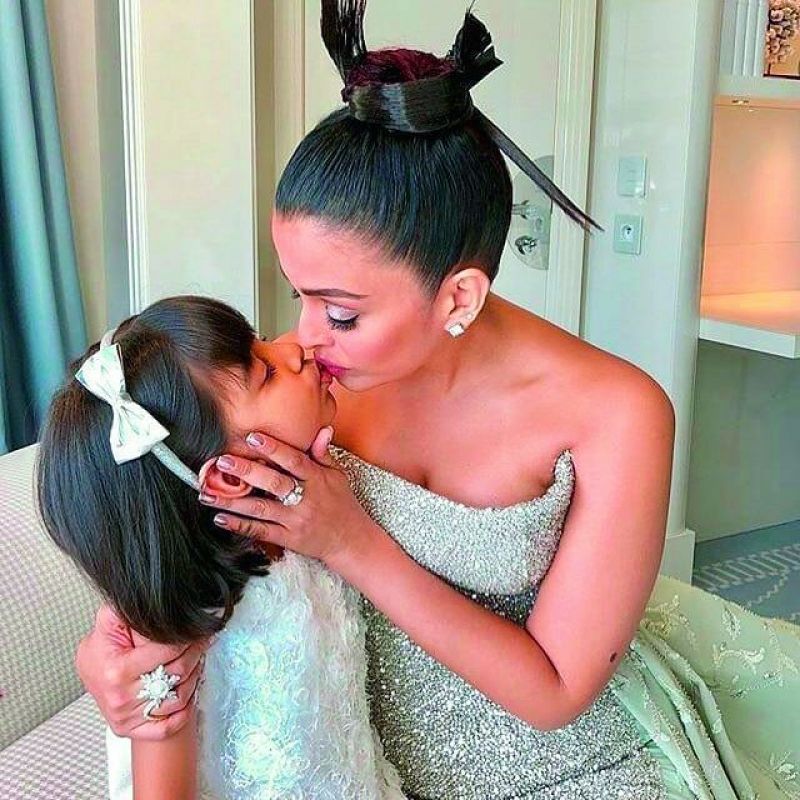 However, there are those who believe that private moments should be kept private, and should not be served up for public consumption. Dr Sharita Shah, women and child psychiatrist at Bombay Hospital, feels that while there is nothing wrong with a parent showing affection, it’s better to keep these moments off social media. “If it’s a private moment between you and your child, why would you want to display it to the world? People are bound to criticise and make lewd remarks. So, I think the onus is on the parent to be judicious about what they post. Share such pictures with people who matter, not with those who don’t,” she explains.

The doctor further warns about the impact social media criticism could have on a child. “There’s always a chance that children will come across these comments in the future. Children as young as eight and nine-years-old have access to social media. It could impact their mental health negatively,” adds Sharita.

Mother of three, Waluscha de Sousa begs to differ. The actress and model stating how social media helps celebrities connect with fans, she adds this sometimes includes sharing pictures of private moments. The onus, however, lies on the fans to not abuse this connection. “Social media brings us so close to the public. Making it a very personal relationship between celebrities and their fans and that shouldn’t be taken advantage of. This is the way a parent shows affection to their child; it has always been so. Reacting in this crass fashion would make a celebrity feel let down as well. They might think, ‘I’m trying to show you who I really am and how I am with my children, but then it’s taken the wrong way’,” says Waluscha.

Well, instead of hating, maybe it's time to feel the love and show it!