DECCAN CHRONICLE.
Published May 5, 2016, 10:37 am IST
Updated May 5, 2016, 11:52 am IST
Randeep said the film merely chronicles the life of a common man, who was stuck between the political climate of India and Pakistan.

Aishwarya, who was visibly emotional along with the entire cast and crew after Dalbir's speech, said she was honoured to play the part.

Mumbai: The entire team of 'Sarbjit' organised a special prayer meet to commemorate the third death anniversary of Sarbajit who died on May 2, 2013. The film's entire cast, including actress Aishwarya Rai Bachchan, Richa Chaddha, Darshan Kumar and producer Jacky Bhagnani were also present along with Sarbajit's sister Dalbir Kaur, his wife and a daughter.

Directed by Omung Kumar, the movie is based on Sarabjit, who died following an assault by fellow prisoners at a Pakistani jail. Omung said, “I had earlier made up my mind to not make another biopic but when I saw her (Dalbir) speeches on YouTube, I decided that this story needs to be told.”

Randeep said, “I can’t fathom what Sarbjit must have gone through in the 23 years he spent in jail. But what is even more terrible is what the entire family went through. I am thankful to the whole family; it’s not easy to bear your pain and to trust people with your own lives. I am extremely thankful to Omung for being so careful and sensitive while bringing it to light." 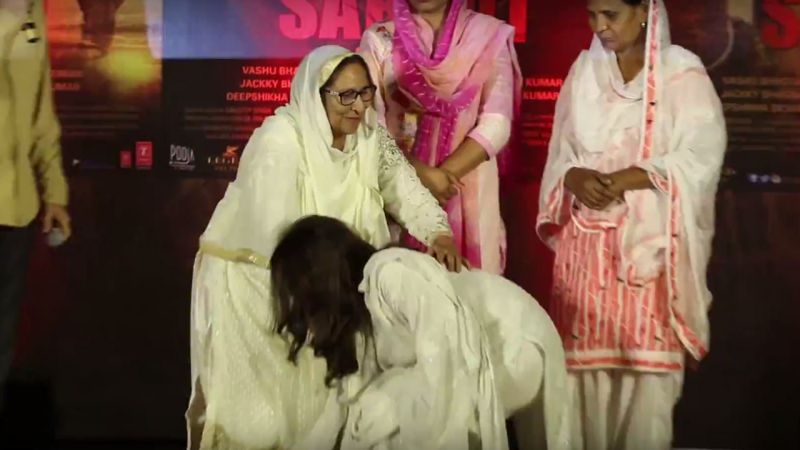 The actor also said that the film does not show Pakistan in a bad light. "I don't think there is any Pakistan bashing per say in the film. But yes, there are a lot of prisoners over there and some are subjected to atrocities. I am not sure if that
happens here as well...If you treat somebody for such things just because of their nationality and not their crime, then, if it happens in India or Pakistan, it is always wrong."

Aishwarya, who was visibly emotional along with the entire cast and crew after Dalbir's speech, said she was honoured to play the part. “Thank you for allowing us into your lives and having faith in all of us. We are blessed that we have got to know you’ll and had the opportunity to be the vehicles to translate your story to the world, which is such an important story.”

Aishwarya, Randeep and Richa break down at Sarabjit prayer meet