Mumbai: Farhan Akhtar and Shibani Dandekar have been in a romantic relationship for a long time now. The duo has always been catching everyone's attention with their public appearance. A few days ago, their Mexico holiday pictures had gone viral on the social media where the lovebirds were setting the beach on fire.

And now, Farhan has again caught his fans' attention by doing social media PDA with ladylove Shibani. The 'Bhaag Milkha Bhaag' actor shared a cute snap on his Instagram and wrote, "Jimbo ❤️".

Well, in this picture one can clearly see, Farhan's cute dog 'Jimbo' innocently lying on someone's lap and we know that is Shibani. Notably, madly in love with Shibani, Farhan got jealous of his dog as he commented by tagging his girlfriend, "lucky dog". Isn't it cute? 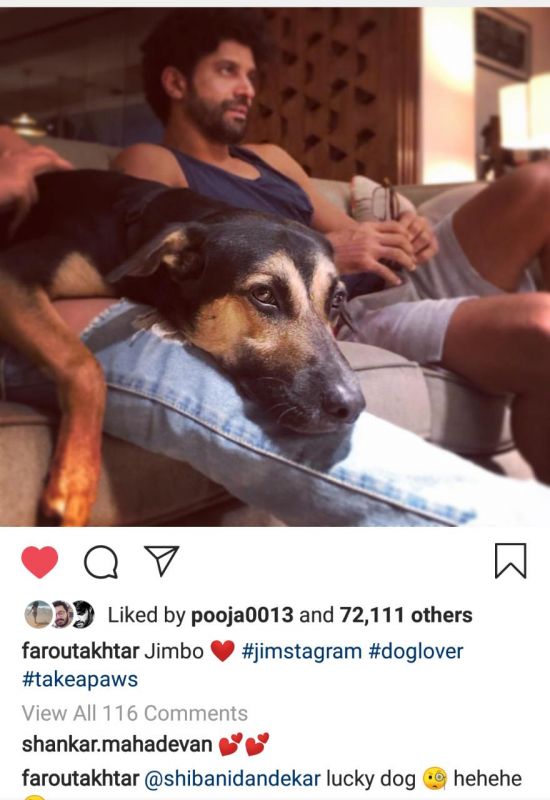 Meanwhile, there have been reports stating that Farhan Akhtar and Shibani Dandekar may get married this year. On the work front, Farhan will next be seen opposite Priyanka Chopra and Zaira Wasim in 'The Sky Is Pink'. Directed by Shonali Bose, the film is scheduled to hit the theatres on October 11, 2019. Apart from that, Farhan also started prepping for Rakeysh Omprakash Mehra's sports-drama, Toofan.